The Wrong way round.

With increasing sidecarrists opting for fitting rear motorcycle tyres on the front, I thought I would put this little article together in regards to rotation arrow and when the wrong way round may well be the right way round.

Having used for several years now and still use rear motorcycle tyres on the front of my outfit, I have never questioned when told many moons ago, that when you fit a rear tyre on the front wheel, you fit it with the directional arrow in the opposite or reverse direction.

But having spoken with fellow sidecarrists, there is a difference of opinion and some are now mounting them with the directional arrow as if fitting the tyre on the rear. I have heard that it has been said that the tread pattern / grooves will not clear the water if you fit at rear tyre in the opposite direction of travel.

I am no expert, but the following advice is available on the Avon Tyres website.

Can I fit a front tyre on the rear and a rear on the front?

Avon would not normally recommend this fitment. If you do this however, due to the way tyres are manufactured, you should reverse the tyre’s direction of rotation if you fit a front tyre on the rear or a rear tyre on the front of your bike. During tyre manufacture, a length of tread rubber is wrapped around the carcass and joined together with an angled bevel type joint. This joint is orientated so that as the tyre rotates, this joint stays shut. As the rear tyre provides drive and the front tyre provides braking, the joint is made one way for the rear tyre and the opposite way for the front. Fitting incorrect tyres could cause potential MOT/insurance issues and may affect the bikes handling capabilities.

Why does the front tyre appear to be running the wrong way?

We call this Inverted Front Grooves. We have done a great deal of testing and research on tread patterns and found the front tyre is better run in the opposite direction to the rear. The front tyre has to deal with braking forces and the rear wheel with drive forces, which are basically opposite forces. This may make the front appear to be running the wrong way round but in wet tests, we have found that the footprint is not long enough for water to channel very far through the grooves, it just needs to be expelled sideways quickly. By running the tyre as we do, we significantly reduce irregular tread wear. This means that even when the tyre is half worn, it is still putting down the correct amount of rubber on the road. Tyres run the other way round suffer from stepped and irregular wear which reduces their footprint and effectiveness in the wet quite dramatically

Before we can talk about directional arrows you must first understand a bit about tread patterns. There are many different tread patterns but there is one main reason to have any tread and that is to disperse water. (dust, dirt)

What is a tread splice? When a tire is manufactured the tread portion of the tire starts out as a long flat strip. This strip is wrapped around the tire and the two ends are cut on an angle so one end overlaps the other rather than having square cut ends.

This overlapping point or splice offers a bigger surface area to bond together, rather than the small surface area provided by square cut ends. (Imagine gluing your fingertips together, as opposed to gluing along the entire length of your fingers laid on top of each other. Like an angled splice, the overlapping fingers result in a much stronger bond).

To further ensure the strength of this bond along the tread splice the directional arrow will show you which way to mount the tire so that when the rider is “on the gas”; the acceleration force on the rear tire is pressing the splice together, rather than peeling it back.

As for braking, 80 % of the braking should take place in the front on most bikes. Therefore, the front tread splice is run in the opposite direction than that of the rear, so when the rider is on the brakes, he’s not peeling the tread splice back.

If you are using a tire that has a directional arrow for rear rotation only and for some reason you want to put it on the front, make sure it is rotating in the opposite direction so you don’t aggravate the tread splice. Avon Tyres.

The following I spotted on a forum, Dunlop tyres answer the forum user’s question

I’ve just had a set of Dunlop Qualifiers RR fitted to my Tuono, refitted the front wheel (obviously without checking the arrow for rotation!) the wrong way round.

If you think of the tread pattern as being an arrow head I would normally expect the point to meet the road first so that water is forced out to the edge of the tyre (which is what happens with the rear).

This tyre is the other way around, the tread pattern at the edge of the tyre meets the road first, which looks like it would then force water back towards the centre of the tyre.

Hi, I’m from Dunlop motorcycle tyres and I hope what follows explains why front and rear tread patterns are in opposite directions to each other

Tread patterns have several other duties other than evacuating water. One of which is to contribute to even-tread-wear characteristics, i.e. not wear out in a stepped manner that can affect a bike’s handling towards the end of the tyre’s life.

In order to give smooth, even wear the tread grooves need to be aligned with the forces acting upon the tyre. With the rear tyre the forces are accelerative (from the engine) and cornering. The further the bike is leaned over the less effect the accelerative forces have because the amount you’re on the gas reduces as lean angles increase. But as the bike is leaned further over the more the cornering forces come into effect.

So in the centre of the tyre the grooves tend to be more circumferential in order to align them with the accelerative forces pushing the bike forwards at more upright angles. But the grooves gradually arc outwards towards the tyre’s shoulders as the cornering forces come increasingly into play. Hence, even though most tyre tread designs differ from each other you will usually find large elements of arcing tread design. And those tyres that don’t follow this principle tend to have poorer wear characteristics.

Because bikes are not 2-wheel-drive vehicles, the forces acting upon a front tyre are not accelerative and cornering but braking and cornering. Braking forces affect a rear tyre a little but they are overwhelmed by the accelerative forces. The vast majority of the bike’s braking is done by the front tyre and braking forces are in the opposite direction to accelerative forces so in order the align the tread grooves with these forces from upright to leaned over they need to be in the opposite direction to rear tyre tread grooves. 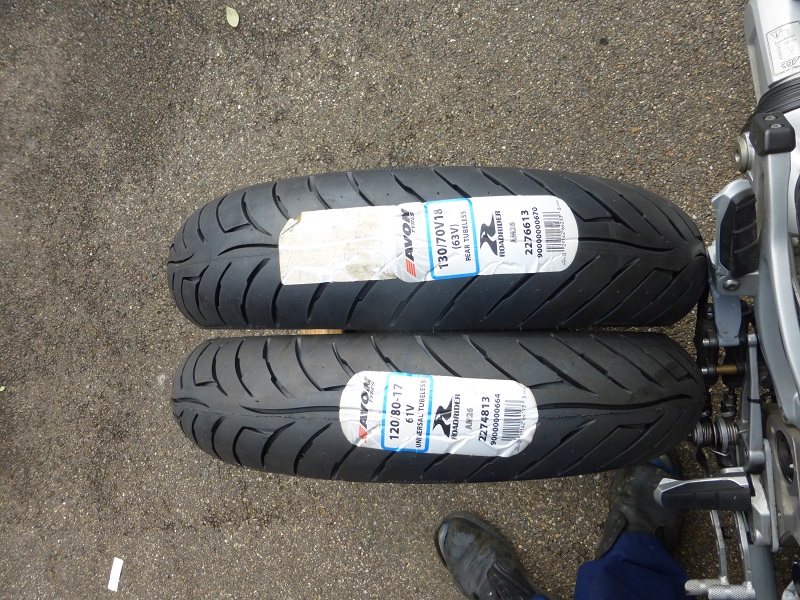 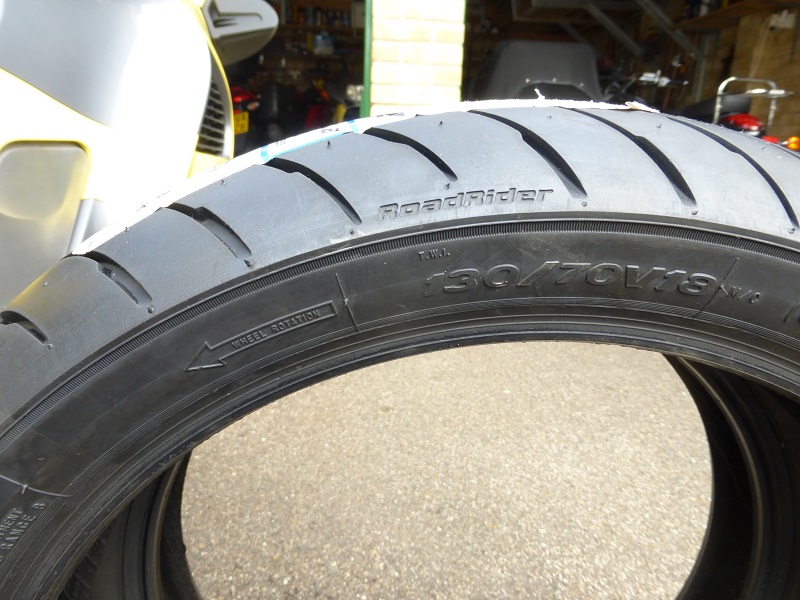 130/70 x 18 which is for rear fitment has only one directional arrow, which is the direction in needs to be when fitting on the rear. 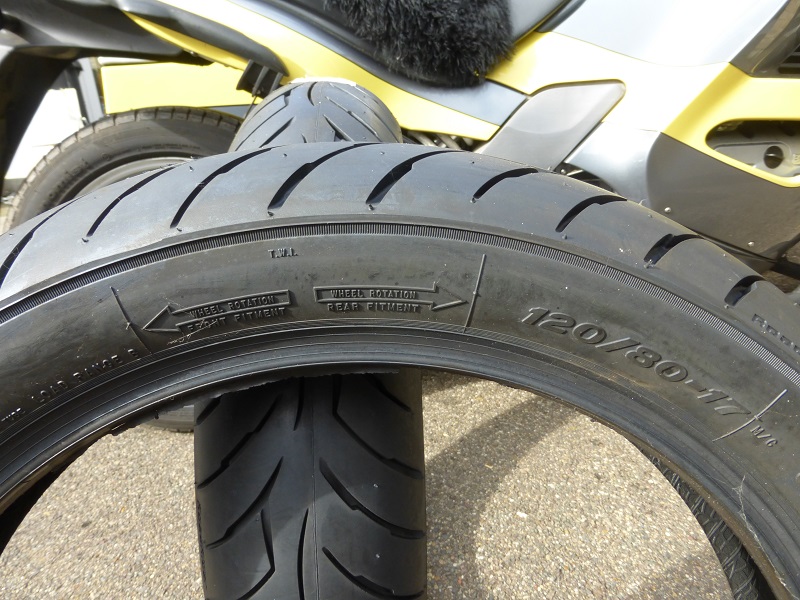 On the 120/80 x17 you get two directional arrows one for front wheel rotation which is the opposite to the one for rear wheel rotation.

So, when I come to fit my 130/70 x 18 on the front wheel of the Black Bomber, which has only got an arrow for rear fitting, do you think I am going to mount it with the directional arrow in the opposite direction, you bet I am. 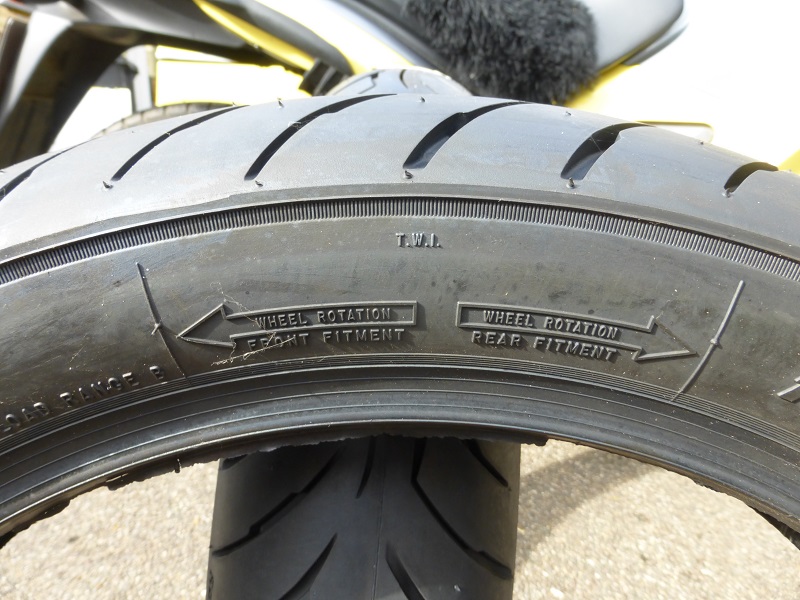 To me it doesn’t get any clearer than that.