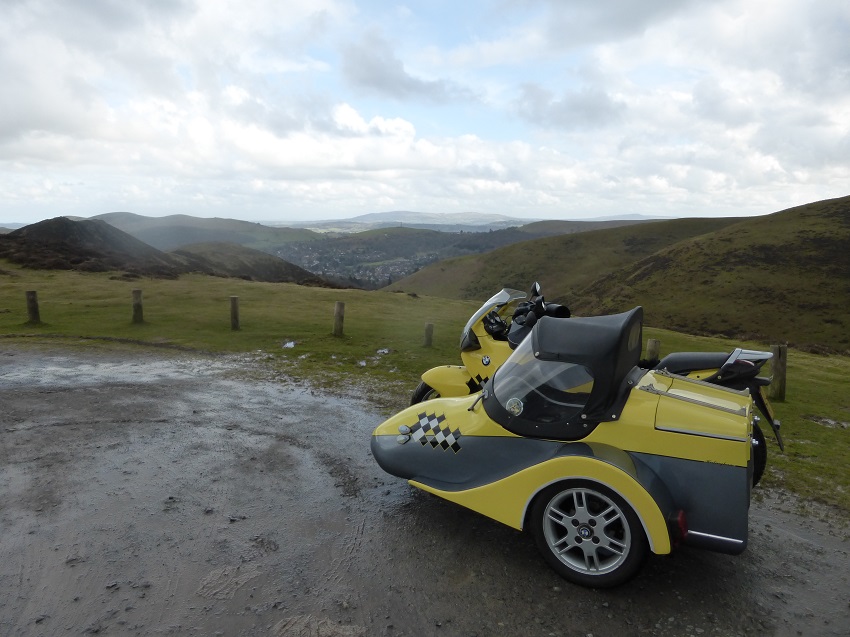 With pensioner Paul crawling up the walls, so to speak, and needing a tester camp to fully test the rebuilt outfit, plus to see how he would get on camping with his, not yet fully mended, broken leg, the Three Amigos arranged a tester camp at The Bridges YHA.  YHA Bridges

The ride there was lovely and great views to be had on the Long Mynd, I did know snow was forecast, but took that to mean a light dusting!

Paul was there waiting when I arrived, he hadn’t put his tent up as Angela, the hostel warden, suggested we may want to stay inside the hostel, but that would defeat the object of a tester camp. So we pitched our tents and waited for the last Amigo to arrive, on his wife’s outfit.

With the Bridges Pub only a few yards away, The Bridges Pub we headed down there to sample some Tree Tuns beer before heading back for our 3 course meal we had booked at the Hostel. We retired to the lounge and socialised with the others stopping in the hostel who were there completing some of the local walks. 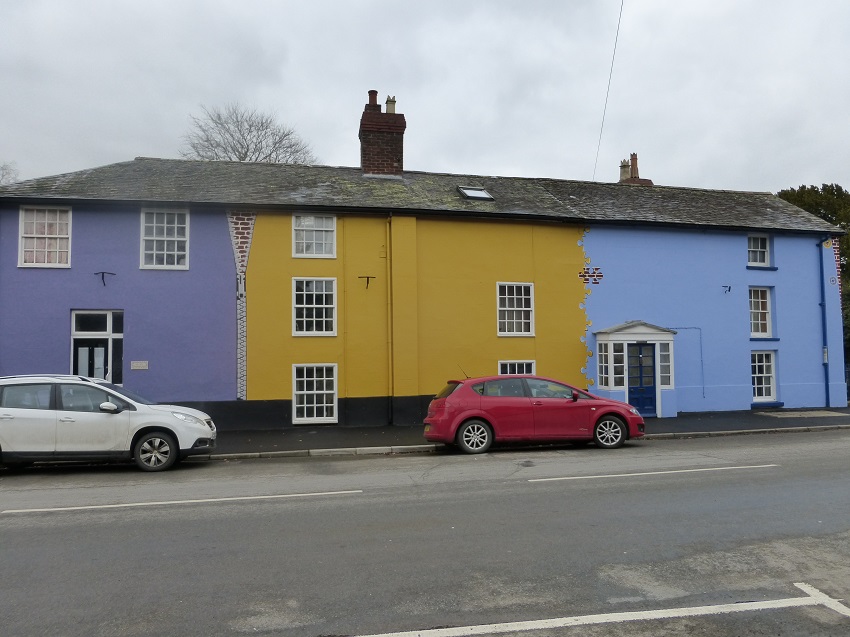 We awoke on Saturday to a light dusting of snow, no real issue, it simply made the roads wet. After breakfast we headed down to Bishops Castle on a reccy mission for the Jolly Boys annual outing later in the year. From there we had a ride around to Church Stretton, a few snow flurries which didn’t amount to much, but it was bitterly cold. We then headed up the Bur Way onto the Long Mynd to take a picture on the top, before heading back to the Hostel. 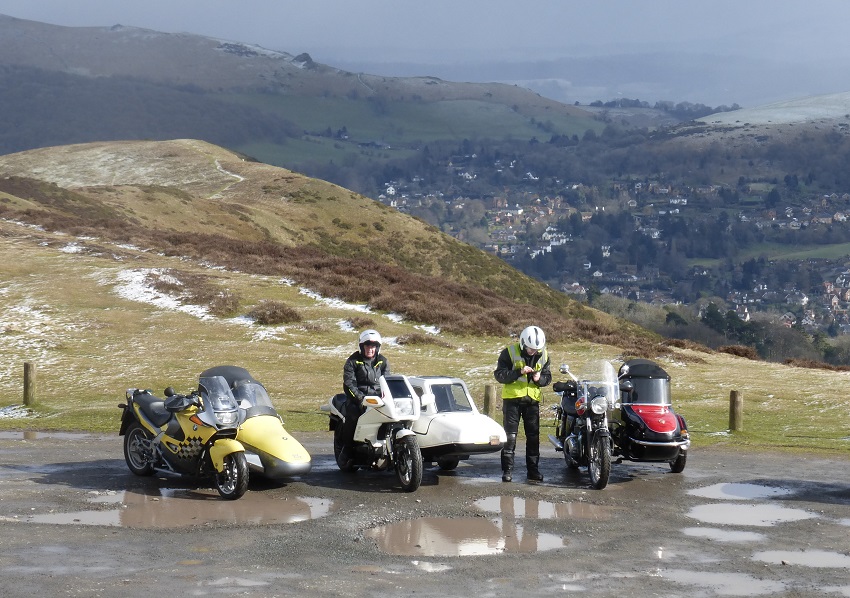 For Saturday evening we had booked food at the Pub and by the time we headed down it was snowing yet again. I had phoned and spoken to Lesley who told me that we were in an amber area with up to 25cm of snow forecast to fall over night. We still didn’t think for one minute we would get much snow, but while we were in the pub it continued to snow and by the time we left, a substantial amount had fallen. But we were still optimistic that what had fallen was it basically and it would be fine in the morning. 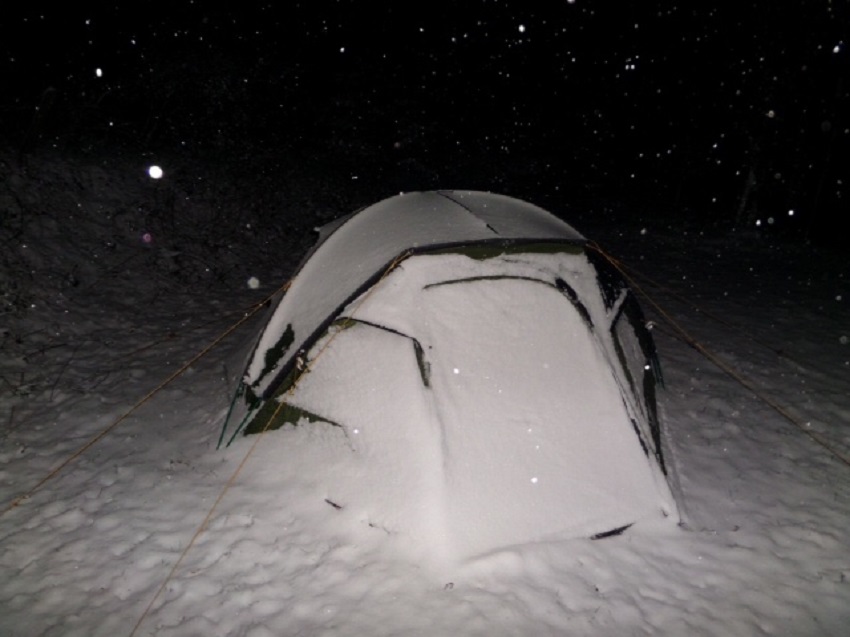 Morning dawned and it had been snowing overnight, so much so there were some concerned faces. 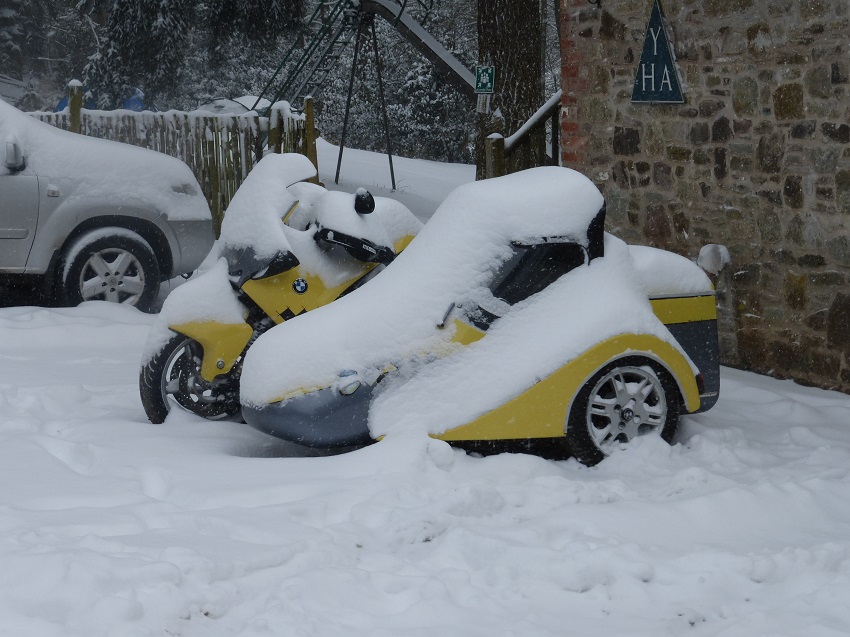 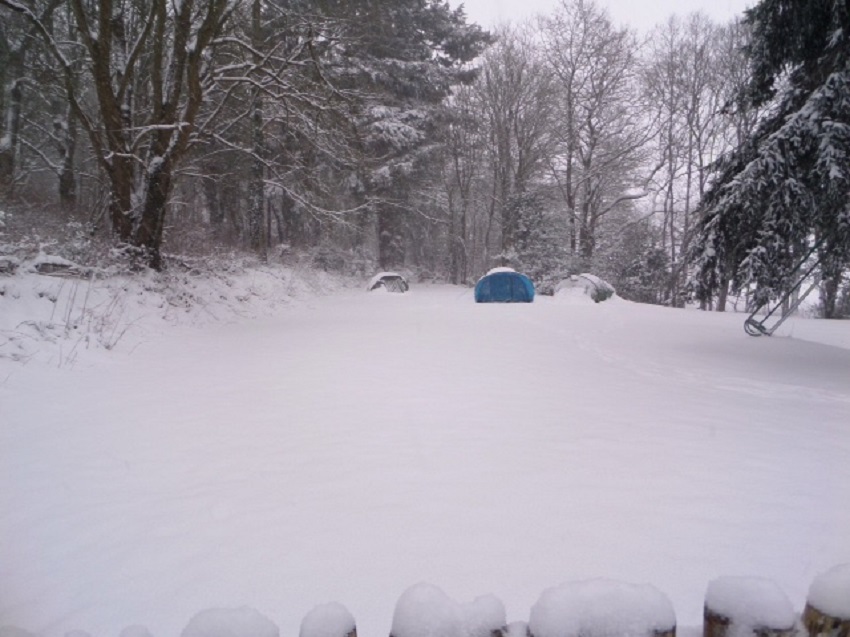 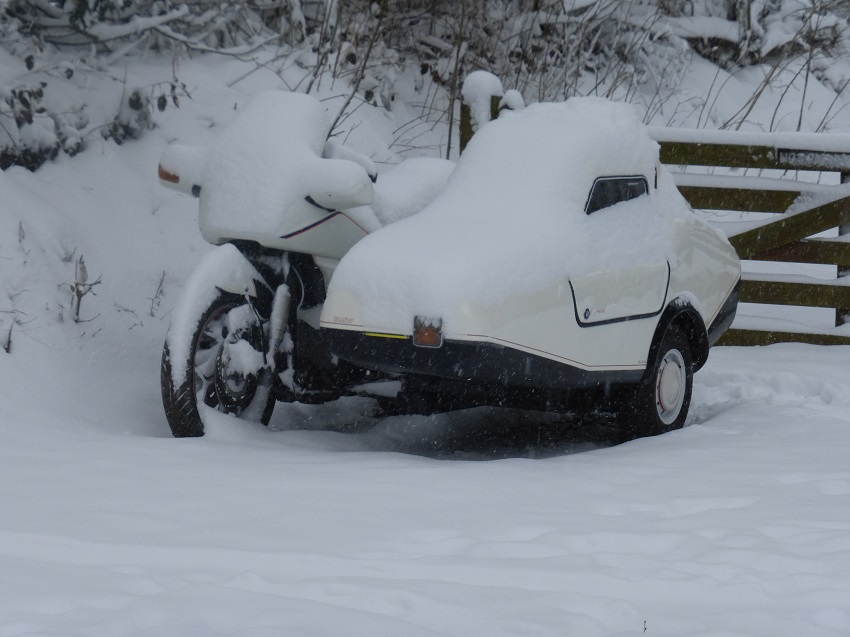 However while having breakfast the local farmer went past with a snow plough, apparently the local farmers are contracted to clear and grit the roads. With snow still falling Mark headed off soon after breakfast as did some of the others at the Hostel. Paul and I opted to stop a while, leisurely packing our gear in the snow and keeping warm in the Hostel. 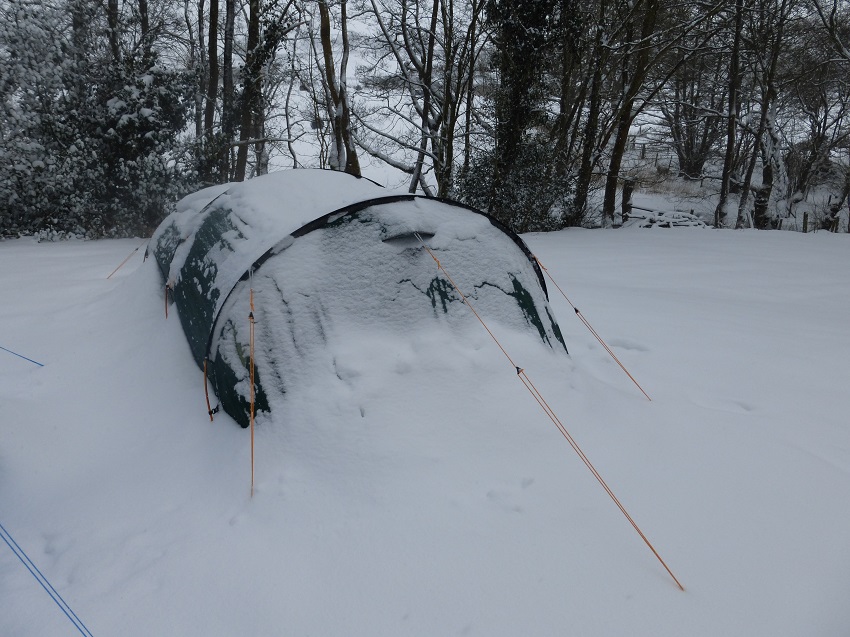 We simply said if it was too bad we would stop another night, but in the Hostel. A phone call to Lesley was next to get an update on the roads, she told us the main roads at Shrewsbury and motorways were clear. Our only issue was getting to Shrewsbury, so we decided to go for it, on the basis that Mark hadn’t come back. 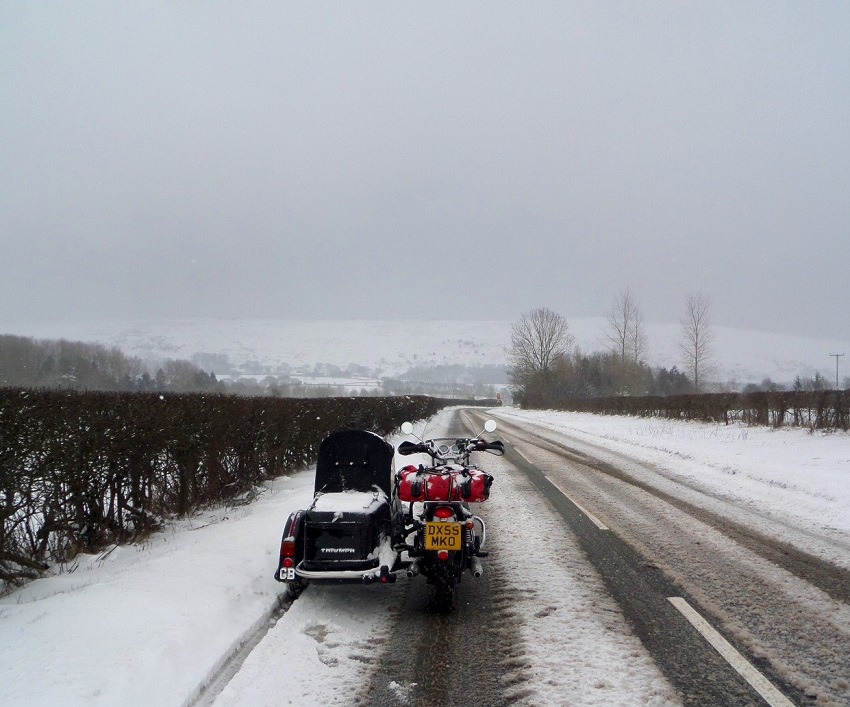 Once on the road I think we should have gone earlier as some of the hills did prove a wee bit tricky, going up and coming down. Just before Pulverbatch we were down to a single track in drifted snow. If it wasn’t for the farmers with their snow ploughs I am certain we would have been spending another night at the Hostel. 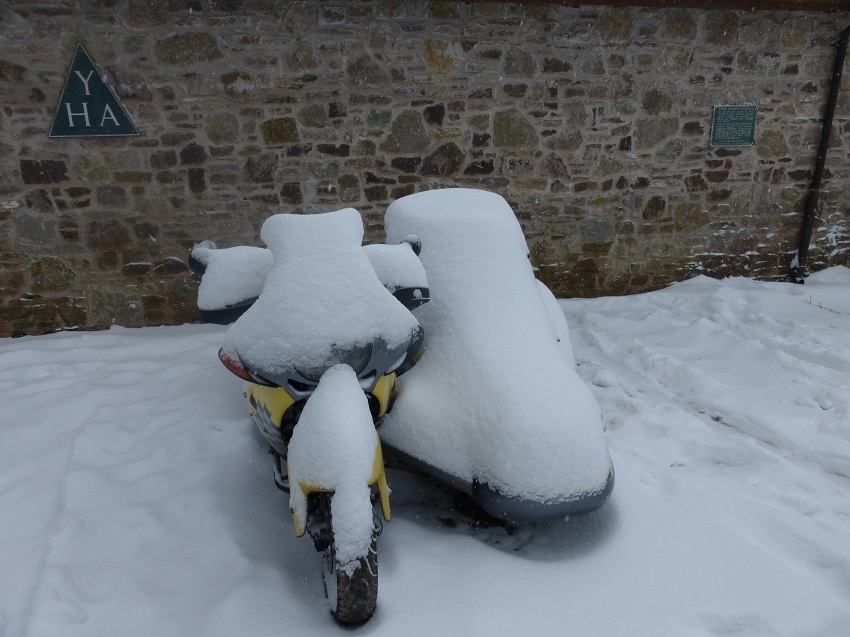 Anyhow we made it to Shrewsbury, be it at a very slow pace and my ABS lights going crazy from wheel spin and the constant cutting in of the ABS, simply switching off the ignition and re-starting the bike at a set of traffic lights sorted it out. Once on the A5 and then motorway the road were clear. Paul parted company with me opting to head home via Wolverhampton and I simply used the M6 and A14.

It will be one of those weekends you wonder why the hell you did it, but one that you’ll never forget and glad you did it. As for a tester camp for Paul, well, it certainly was testing to say the least.

PS It brings back memories of a trip back from Scotland with Michael.

Finally these pictures are for Ann and Sue, apparently this is your means of transport for your next trip. 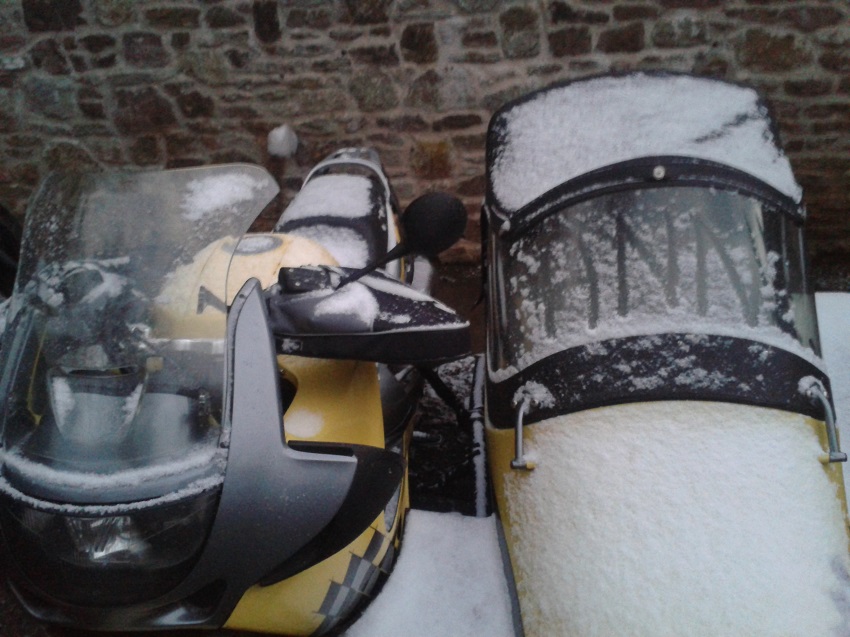 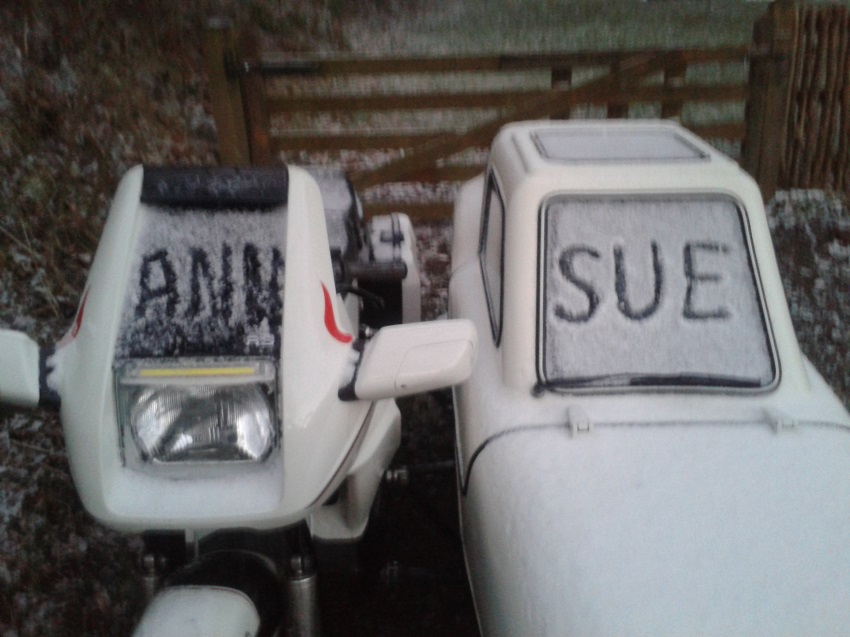