by Roy and Chris with pictures from Roy, John and Skippy

17 Outfits on display on the Tri-Anglia Wheels stand from a Vincent to a Honda CTX.

This was the fourth year that the Carole Nash and MCN Festival has been held at the Peterborough Showground. 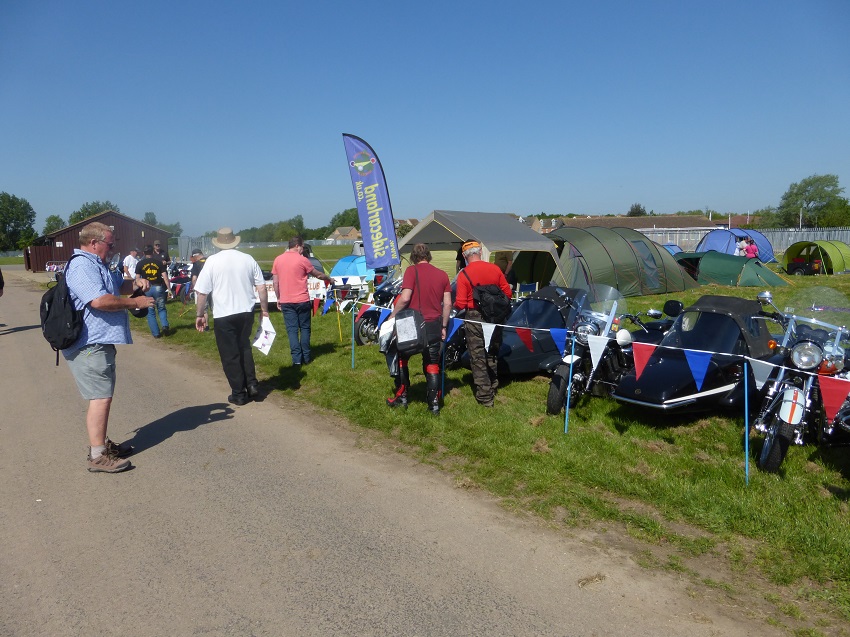 On Saturday morning my alarm went off at 5.00 am; a quick peep out of the window let me know that it was not raining – this was a plus point. Half an hour later the sun started to shine – what a great way to start a trip! The outfit was on the road just after 6.00 am and I arrived at the showground an hour later. The staff at the gate were very helpful and I was soon pulling onto the Tri-anglia Wheels Club’s space. This was close to the area that we had last year, which made life easy for me; in the past I have ridden around, getting a bit lost, until I have heard Lesley’s voice beckoning me in the right direction. 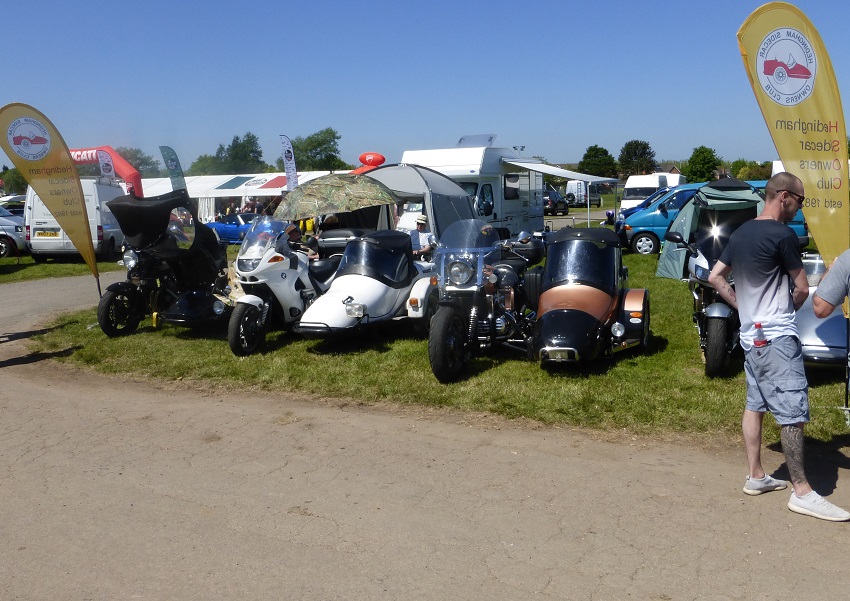 This year there were three main stands for sidecars, all down the same row, but not actually next to each other. The one nearest to us was the Hedingham Sidecar Owners’ Club, and farther down the row came the Fed stand. 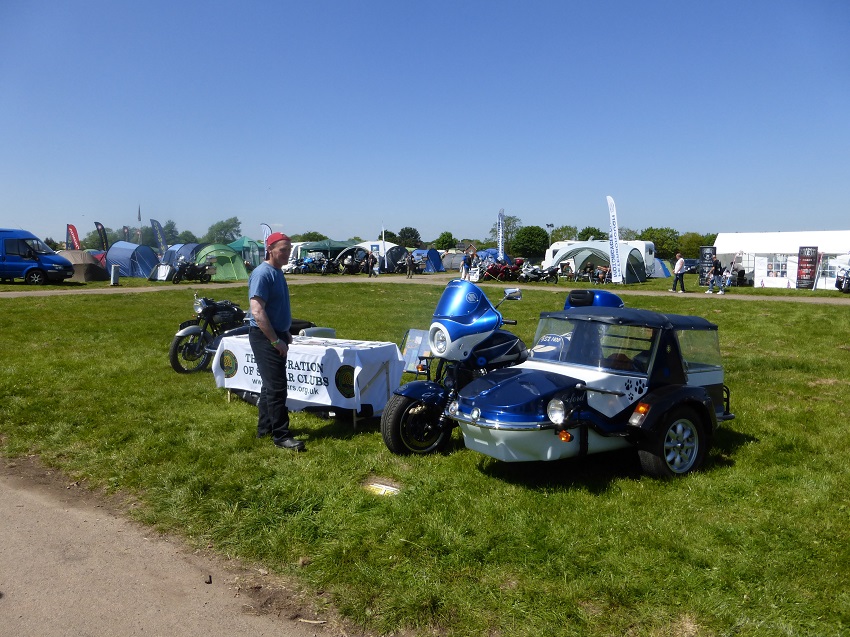 This is a great show. There were 55 different models of motorcycle that you could take for a road test. These were mainly larger-engine bikes; however Herald Motorcycles had some 125 cc machines. The ride-outs basically lasted 45 minutes, taking in a mixture of roads. You had the choice of bikes from 8 different manufacturers, and even those without full licences were able to ride. The people organising these ride-outs were kept very busy, as soon as one group rode out, the next one was getting ready. 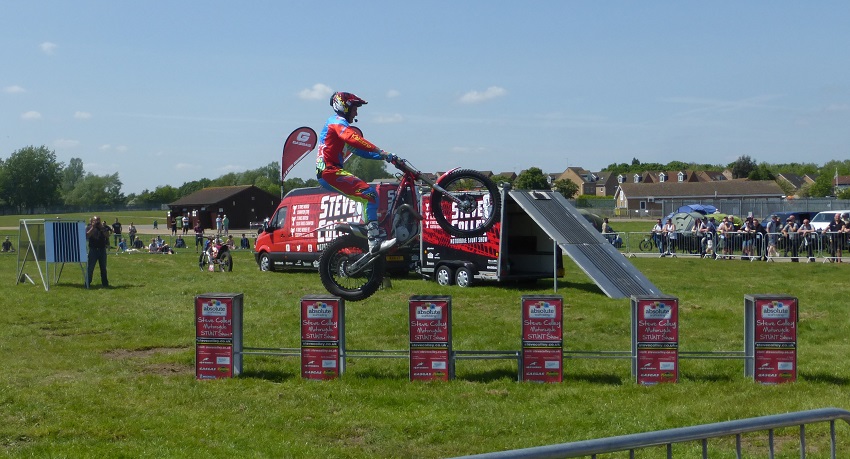 Opposite the Tri-anglia Wheels stand was the Steve Colley Stunt Trials Show.   Steve worked hard over the weekend, putting on three shows a day. It was very hot on both days; the temperatures must have been in the higher twenties and he must have melted in his riding kit! On the far side of his display was the start of the trade stands, with a vast number of retail stands selling some of biking’s best deals. 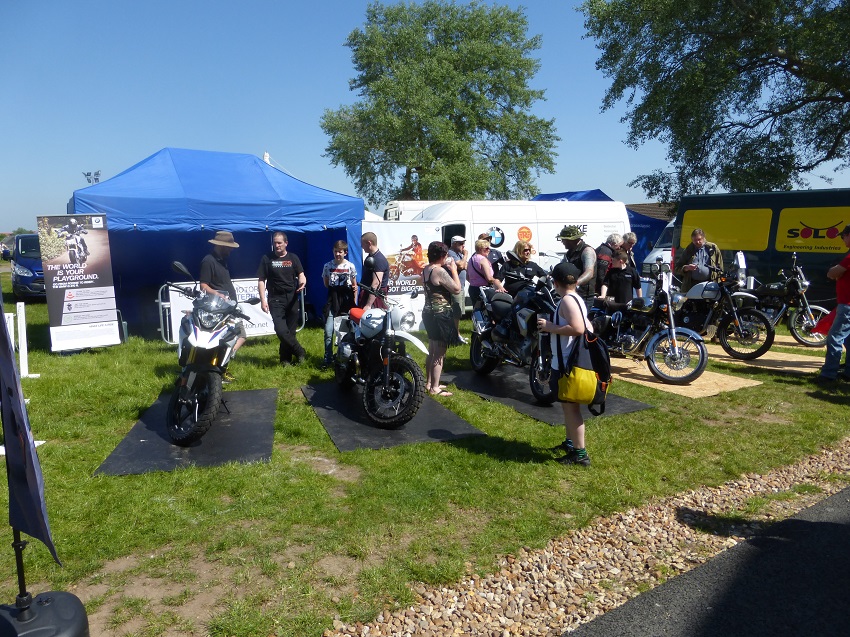 Over 40 clubs were booked in, ranging from the huge Ducati Owners’ Club to the small, but no less dedicated, Hedingham Sidecar Owners’ Club (yes –   they got a mention in the MCN magazine!). With all this choice of clubs that attended it was nice to walk around looking at the different makes of machines and talking to the owners. Still being a member of the MZ Riders’ Club I wandered onto their stand and amongst the bikes was a Solex moped, complete with some garlic hanging off the handlebars. When I was at school a friend of mine had one and he would say to the petrol pump attendant very grandly “Fill her up please” (it only took about three pints)! I rode a Solex the last time we were in France – it was great fun!! 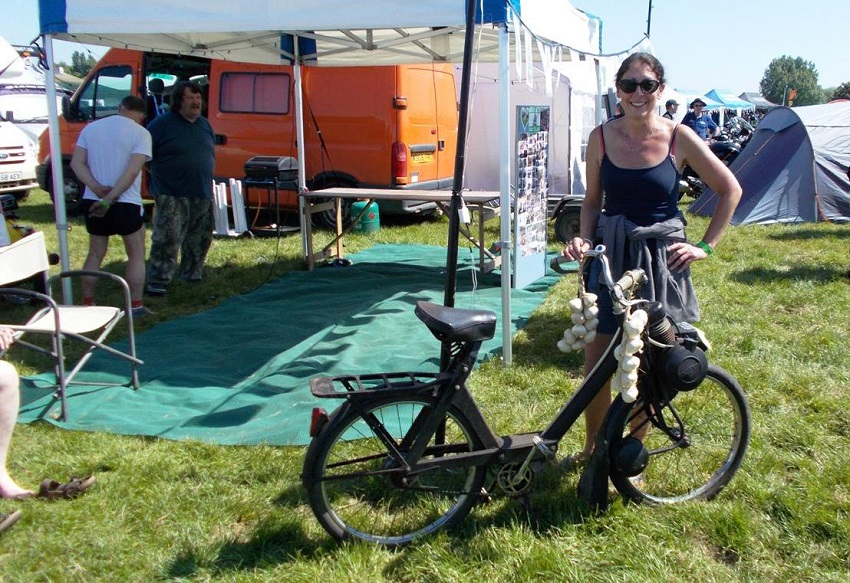 MCN had their area set up with a couple of bars and a kiosk giving out free copies of the MCN newspaper, plus a stage with plenty of live music. On Saturday there were five bands playing sessions lasting about an hour each. One band played “Folsom Prison Blues“- not quite in Johnny Cash’s style but, nevertheless, they were good. On Sunday there were three bands playing. MCN had thoughtfully arranged plenty of seating so you could have a beer and listen to the music in comfort. 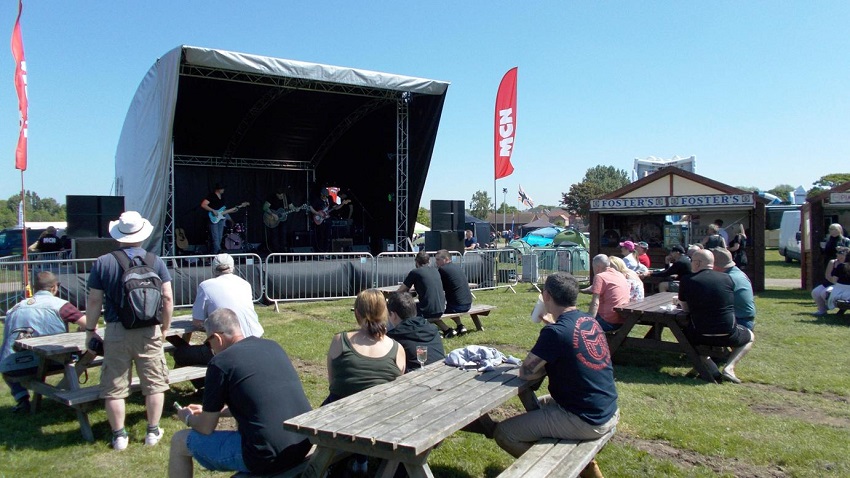 With all of these meetings you get to meet up with friends. Walking onto the club stand I met up with Joss Bourne, who is the motorcycle organiser of the Swaton show, which has been attended by several Fed members in the past; he had spotted my outfit on display on the stand. Somebody else I bumped into was Brian Rust; many years ago he was British Sidecar Grasstrack Champion twice and another year he was runner up. 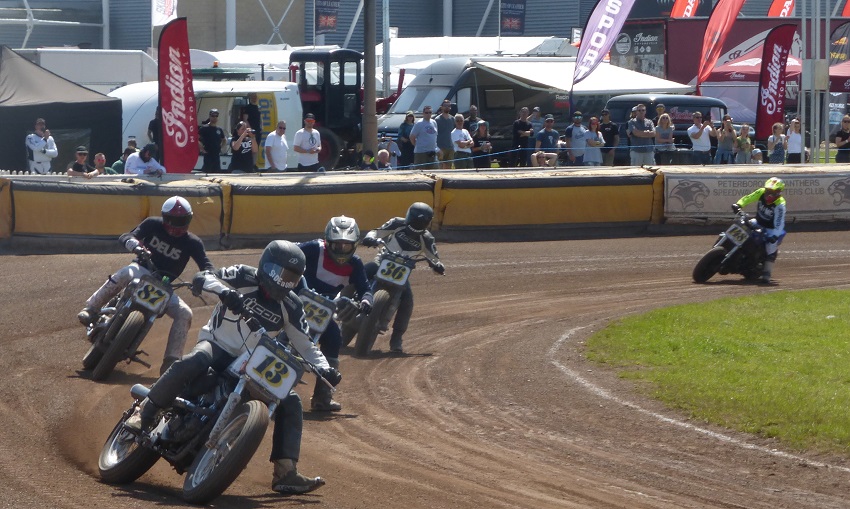 One of the members on the club stand stated that he had just bought his most expensive pint of beer ever – at £4.70p; however John Hind topped that when he was charged £5.00 for a bottle of “Old Speckled Hen“!! 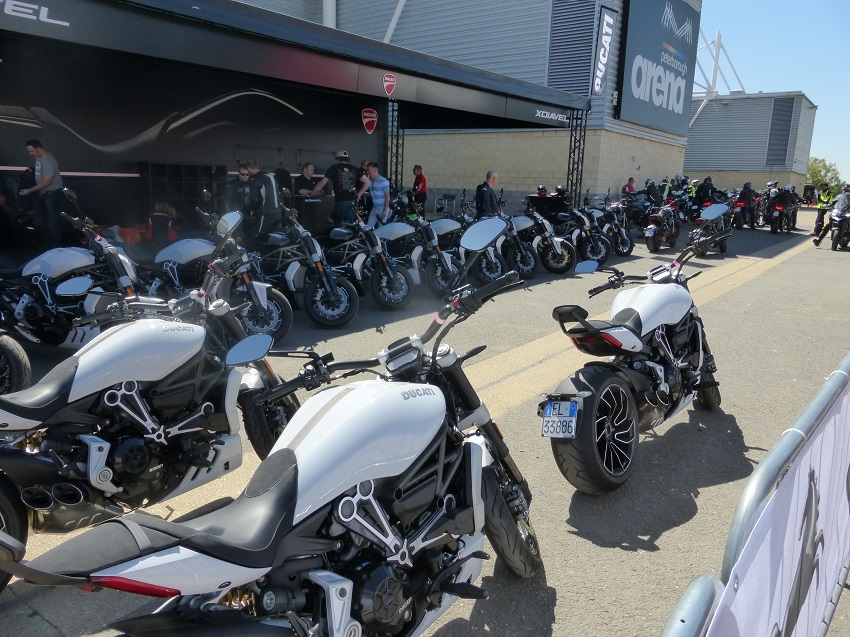 Ducati had a Multistrada Experience that you could go on. This enables you to explore the off-road capabilities of these machines on grass, riding around on an easy obstacle course under the watchful eye of the instructors, and later on you had a short road ride as well. 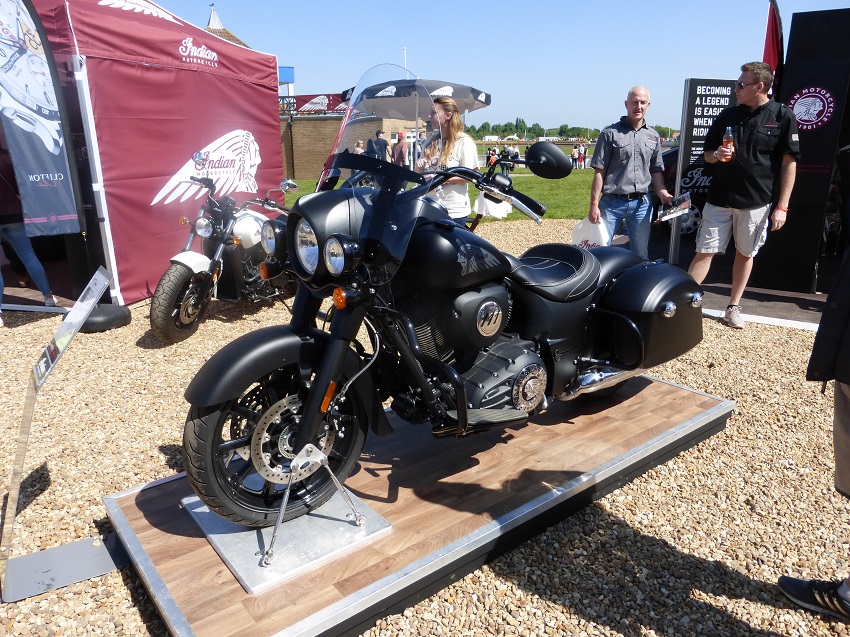 If you were paying for your ticket to get in there was quite a discount if you purchased online and in good time. Children under 16 get in free if the are accompanied by a paying adult. 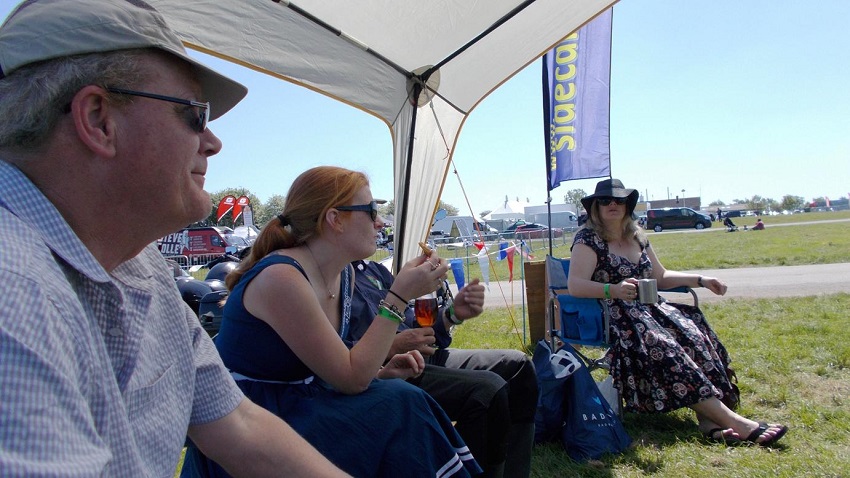 This is a great show – well done to MCN and Carole Nash for organising it. There’s plenty to do and see, from dirt track racing, speedway racing on Saturday night, a motorcycle stunt zone (these riders were good), and plenty of entertainment in the evenings, plus loads of retail stands from which to grab that bargain!

I will be back next year – it’s good a weekend. 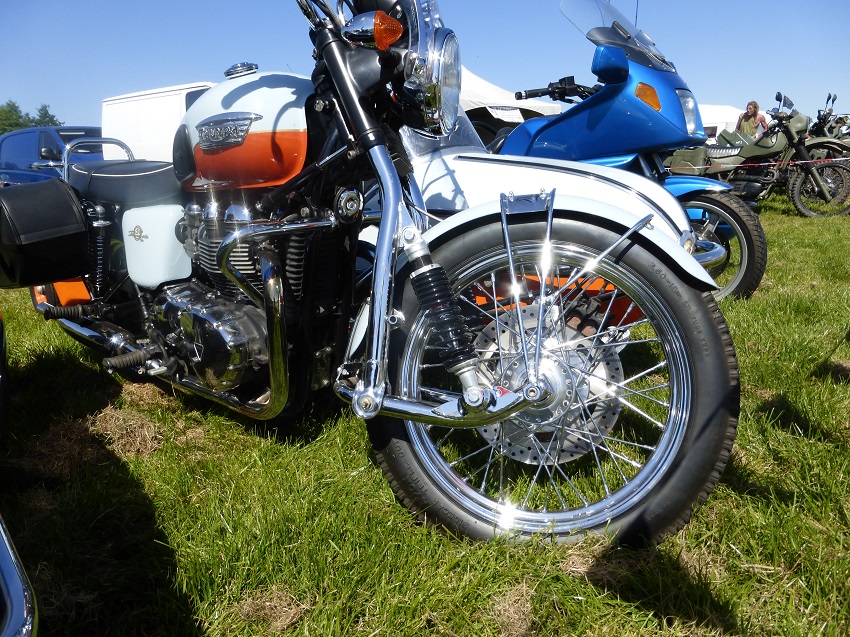 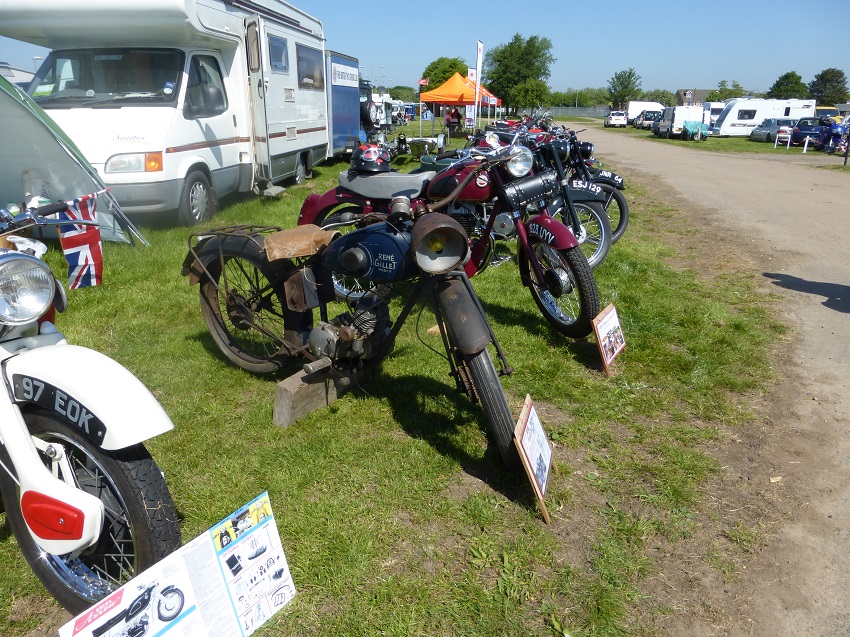 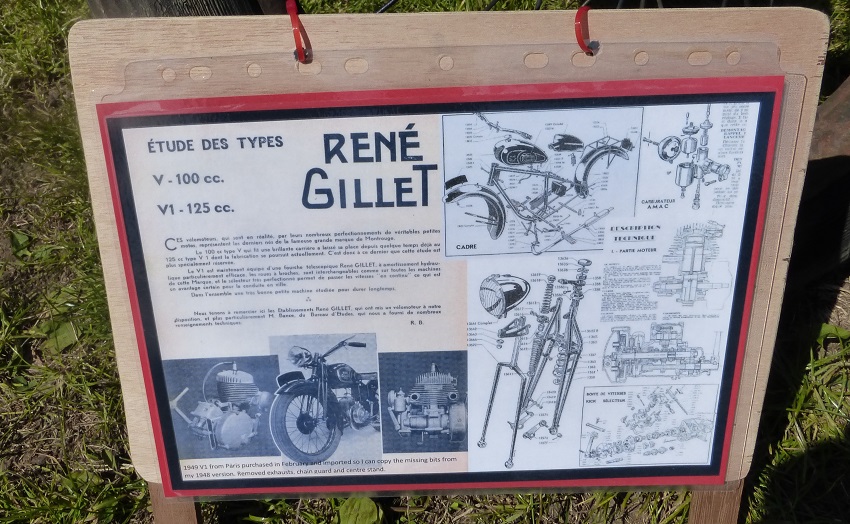 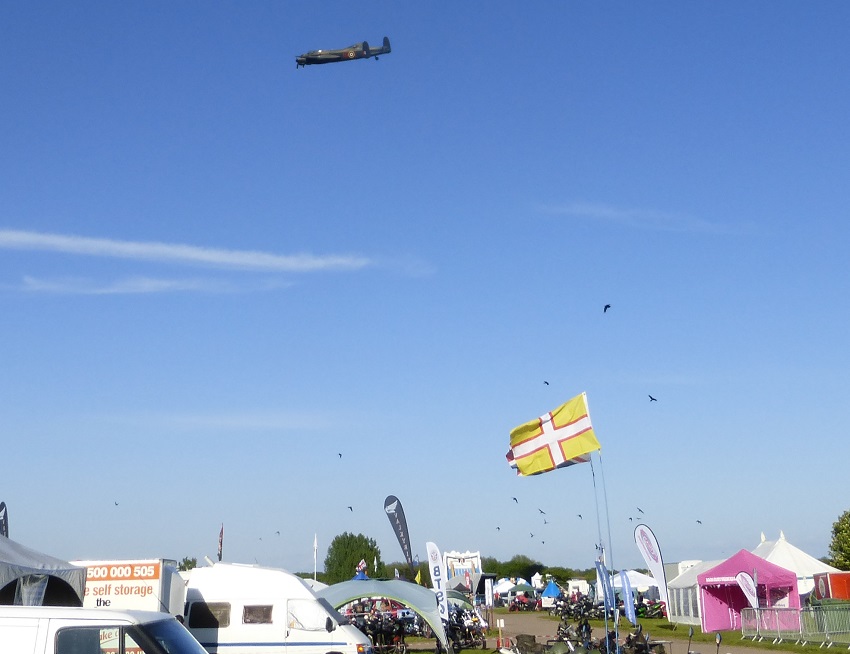 We even had a fly-by with the BoB Lancaster doing a wing wave. 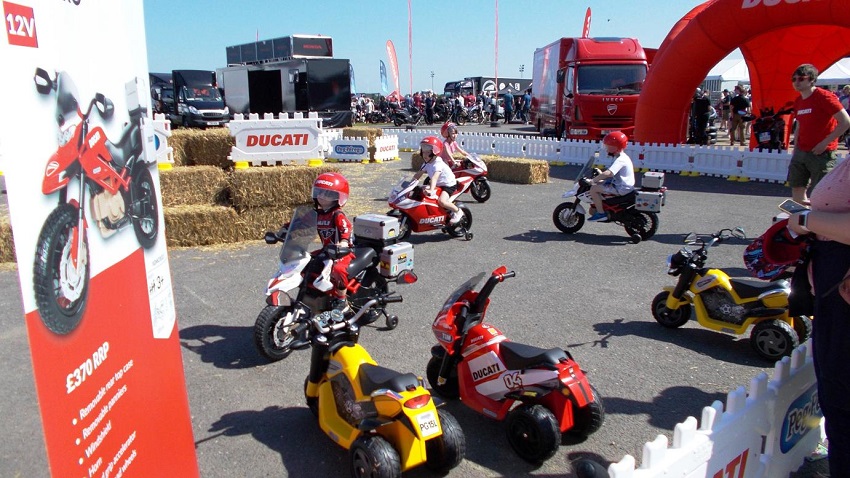 Can anyone see Mark, I am sure he is in the pic somewhere on his little Minky bike. 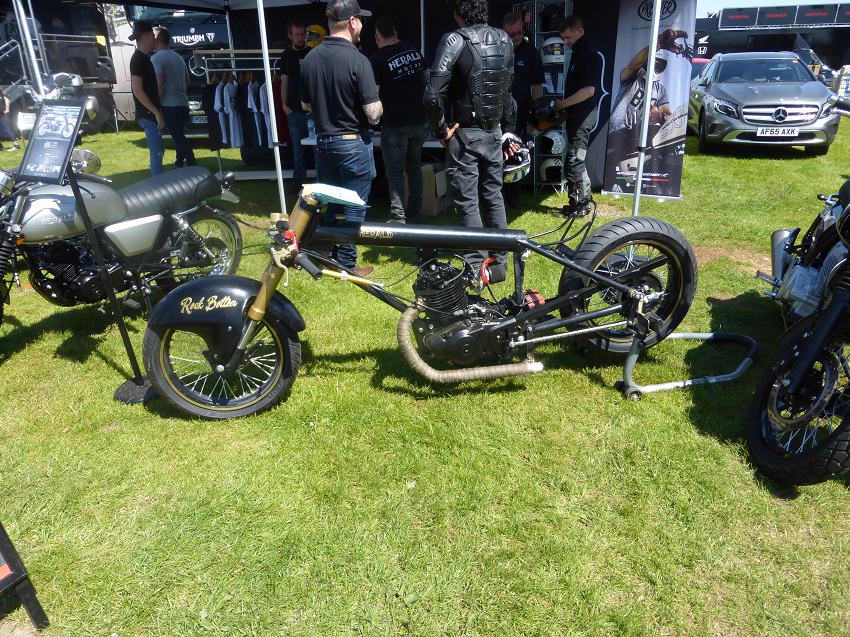 All skippy can say is, the welding was like bird sH!t. 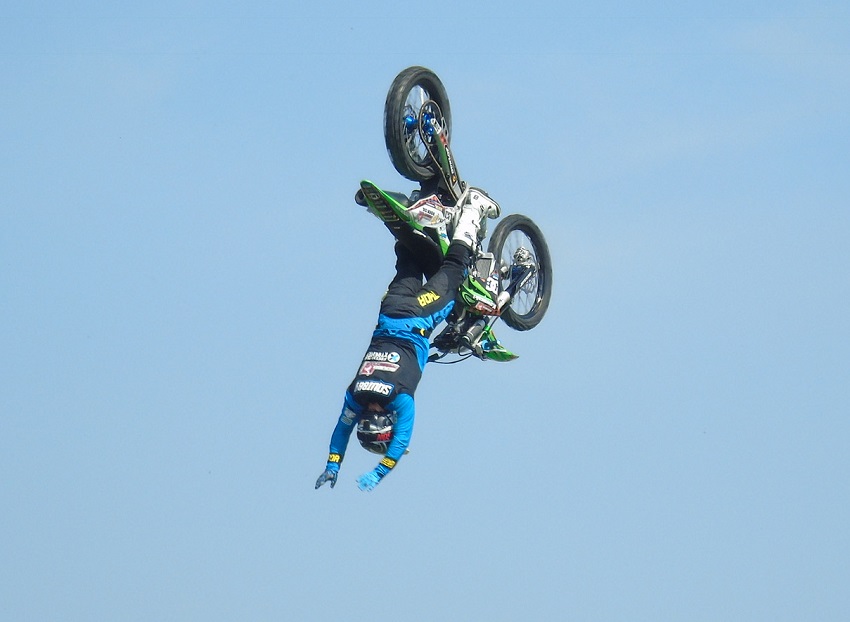 Some great action shots from John. 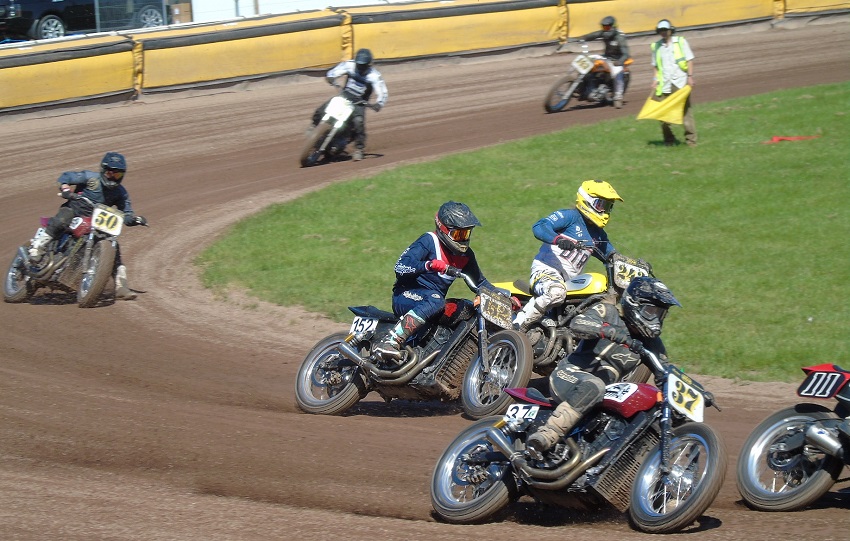 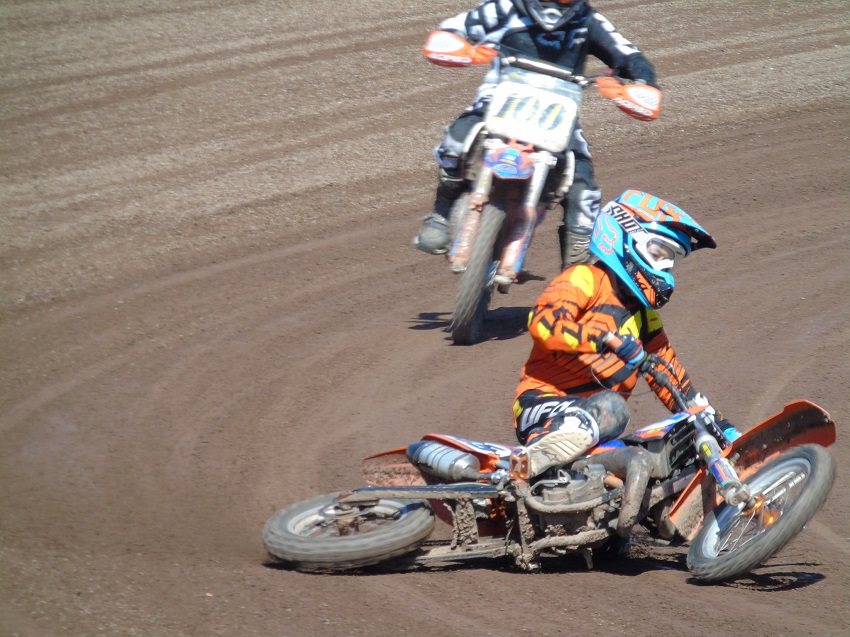 Beyond the point of saving, no damage done and he walked away. 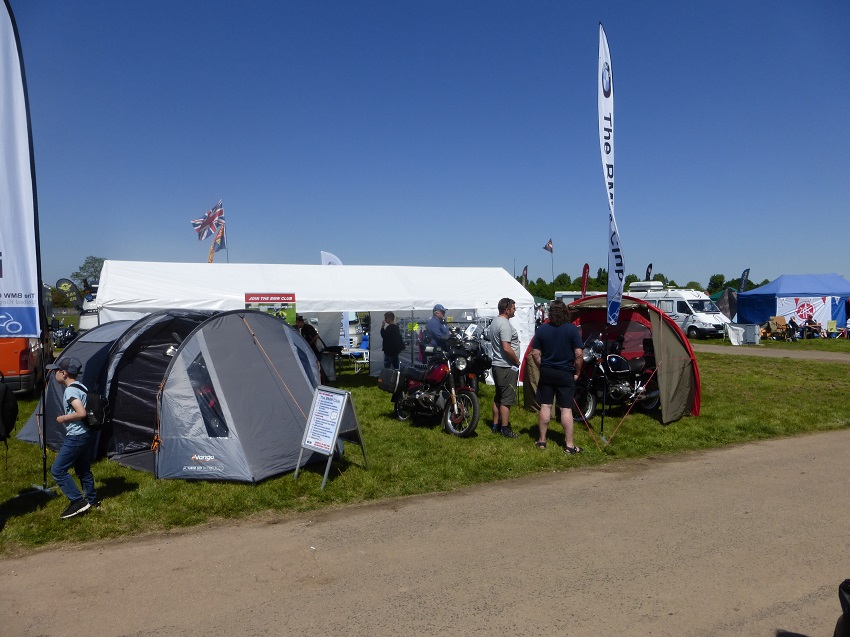 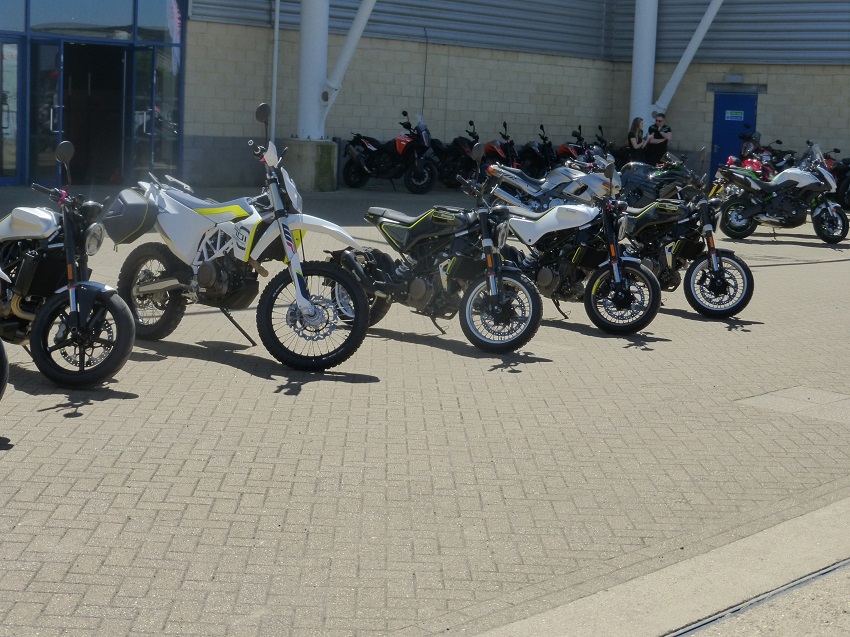 You could even test ride a Husky. http://www.husqvarna-motorcycles.com/ 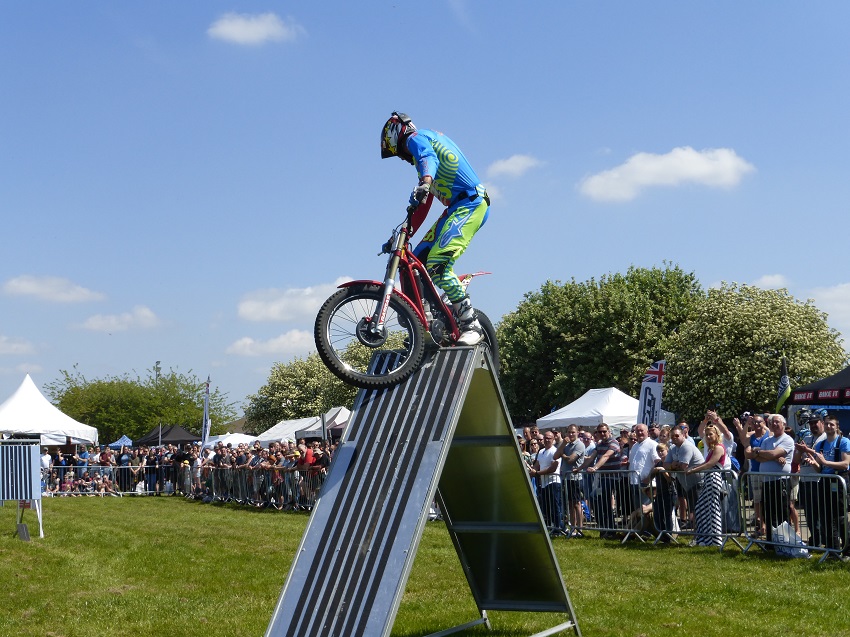 Steve puts on a great show, no less that 6 times to a packed audience every time  http://www.stevecolley.co.uk/ 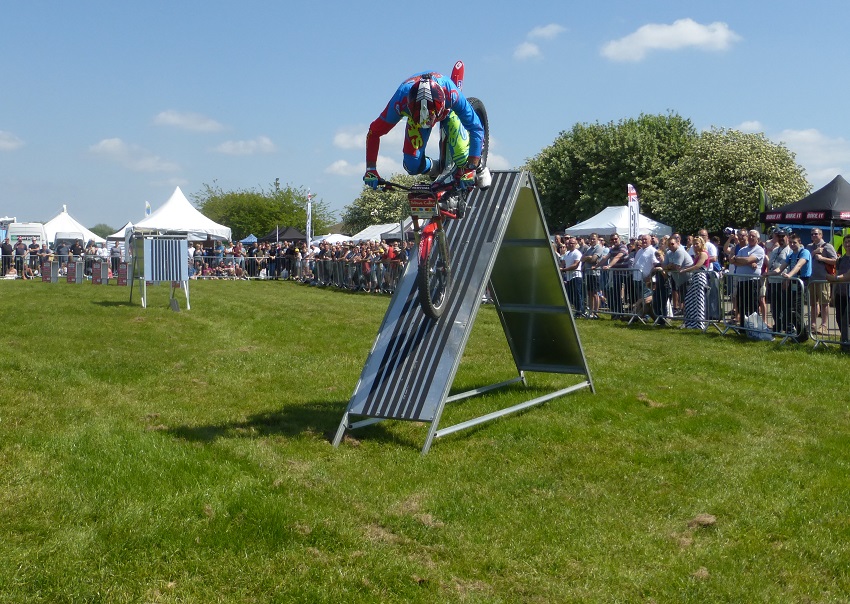 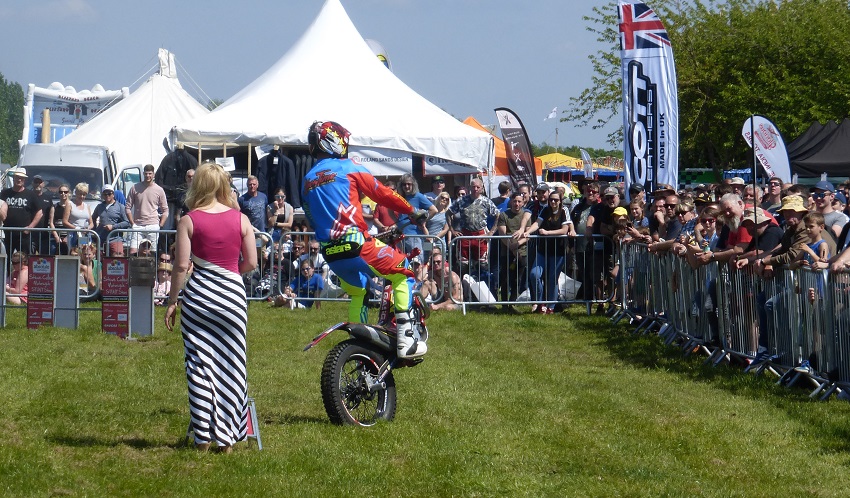 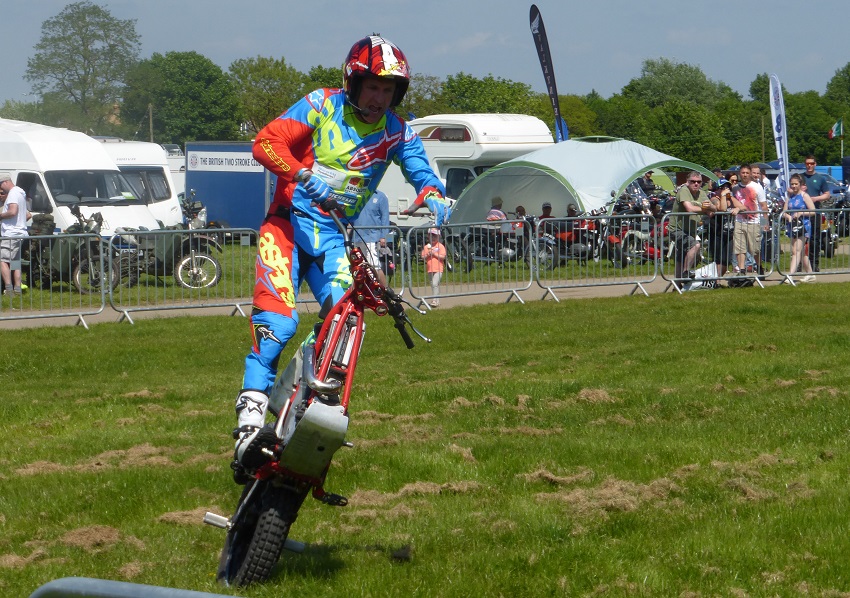 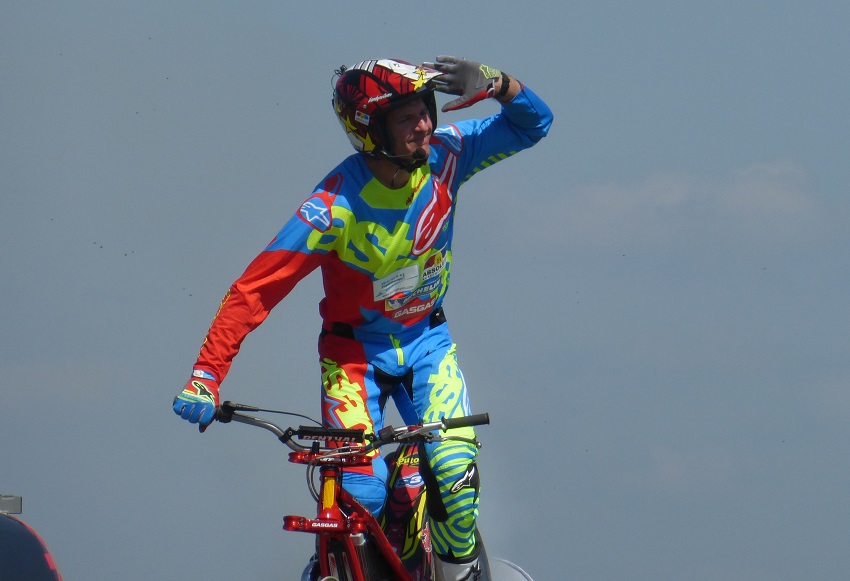 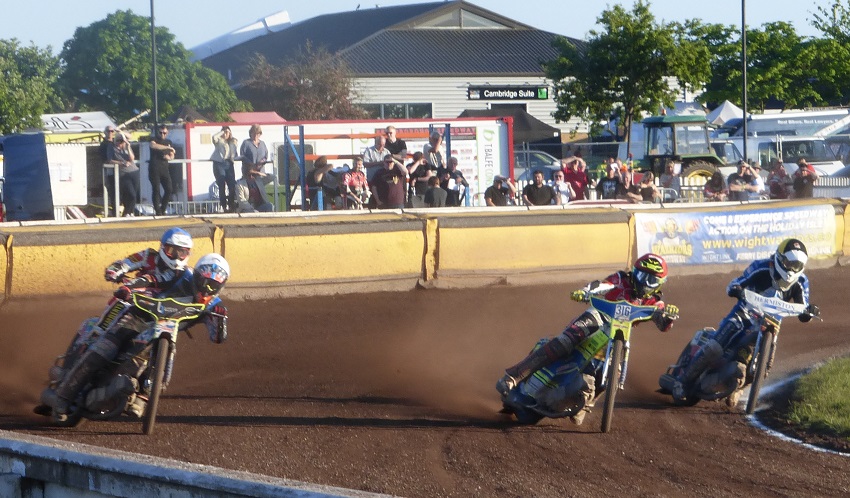 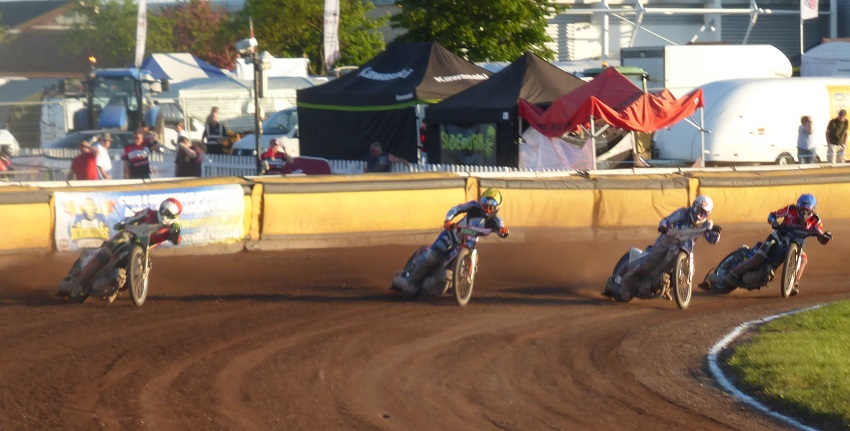 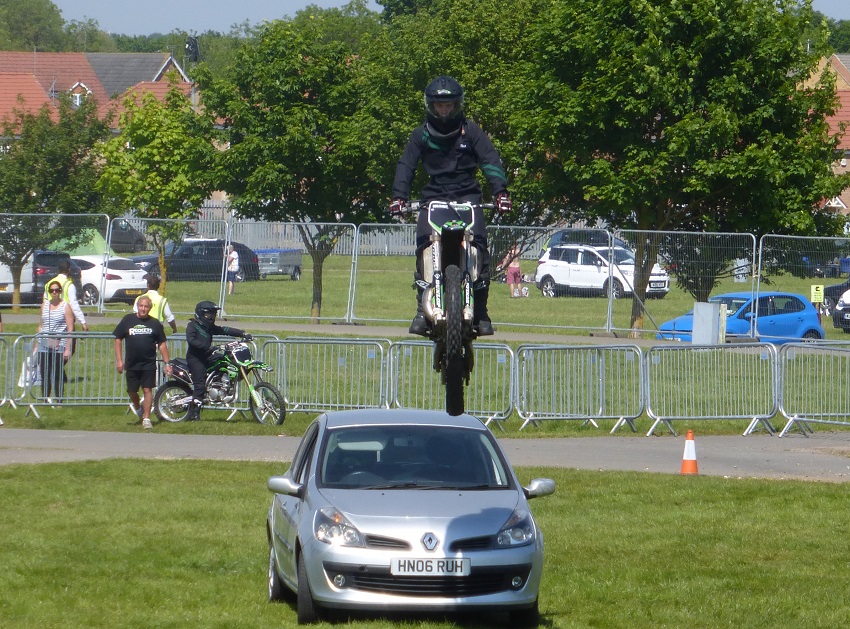 Unlike this lot, par for the course nowadays.