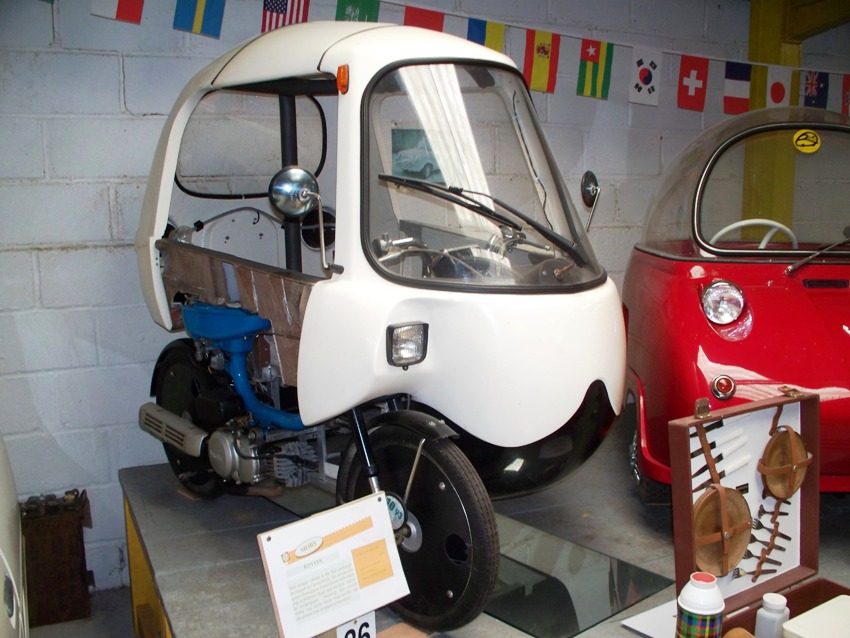 The “Moby”;  Yamaha QT moped with a body built around one side 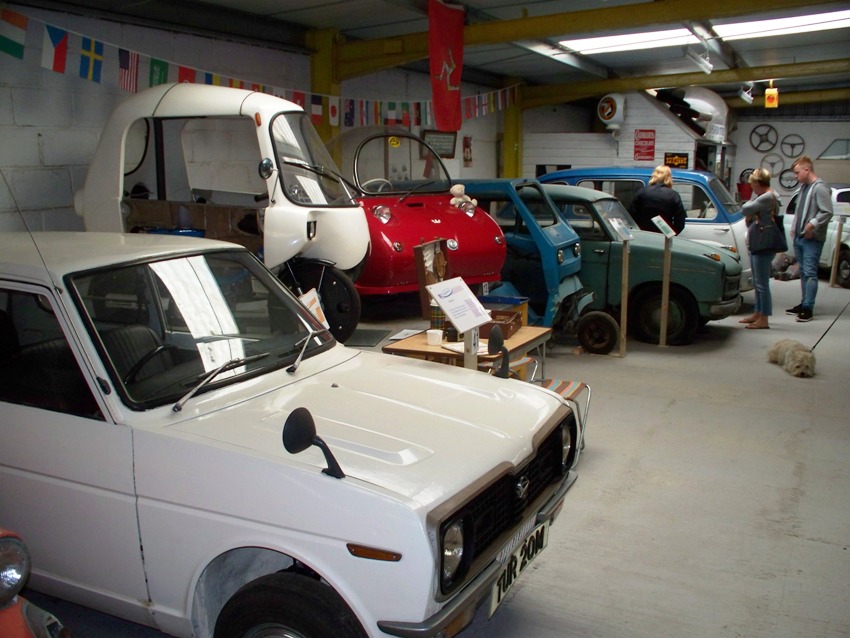 Chris and I recently spent a few days in Kent and visited two motor museums;   one of them (a Morgan Collection) I had known about for many years, but this one I only found out about recently. 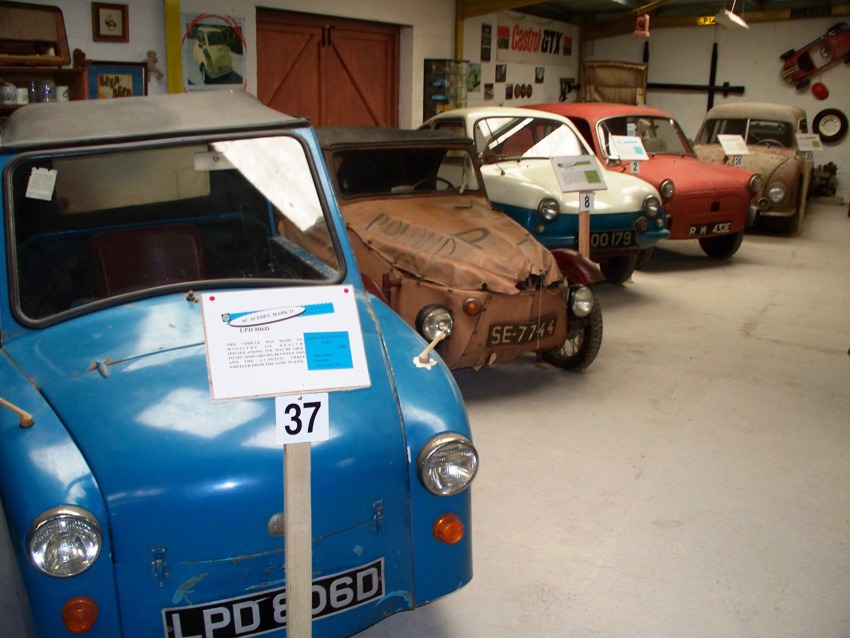 Having owned a BMW Bubble Car many years ago I was interested to visit “The Hammond Microcar Collection” in Kent. It is located next to a campsite, and both the museum and campsite are run by Lesley and Michael. 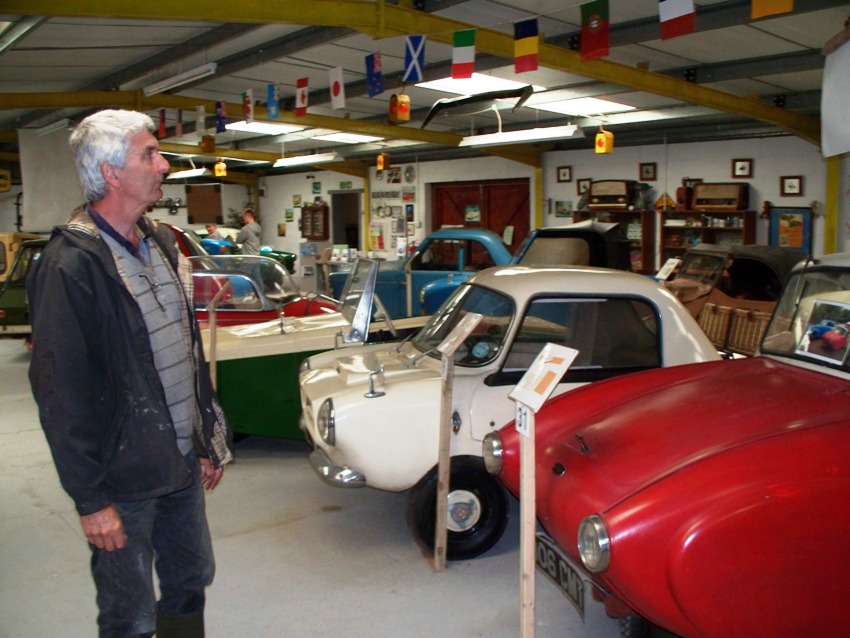 The campsite is situated at Hawkenbury, a small hamlet in the Weald of Kent. This area was made famous by “The Darling Buds of May” TV series. 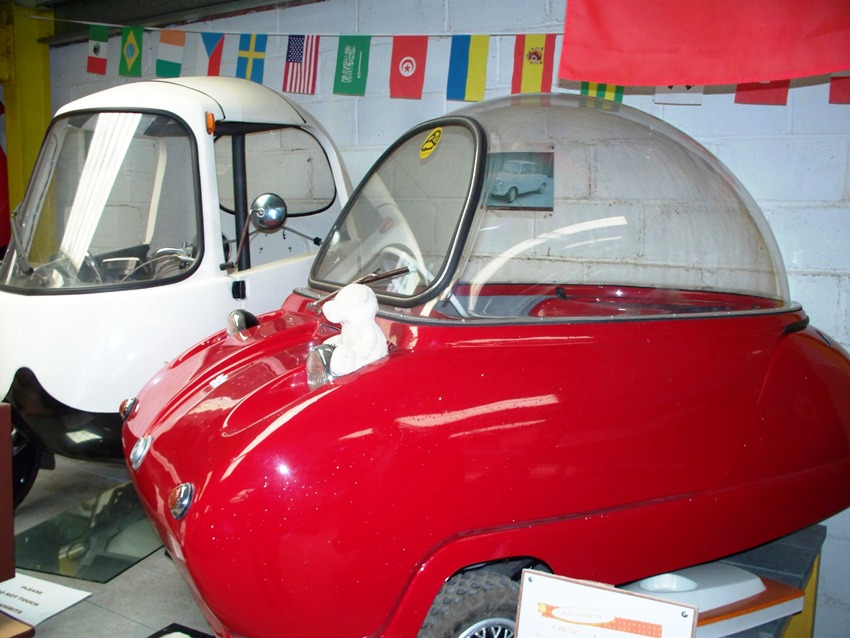 The microcar collection is first class, and it can be viewed either on their annual open day, or a viewing can be arranged by phone throughout the year. We got very lucky and we were able to see the museum at extremely short notice. The collection started when, in 1976, a young son announced that he wanted to buy a motorcycle; his parents got worried and purchased a green 200 cc Heinkel bubble car (affectionately known as “Kermit”) for him instead. This was the start of the collection which now houses over 40 vehicles. Michael showed me around the museum, whilst Lesley guided some of the people who were camping there. They are both very knowledgeable about microcars. 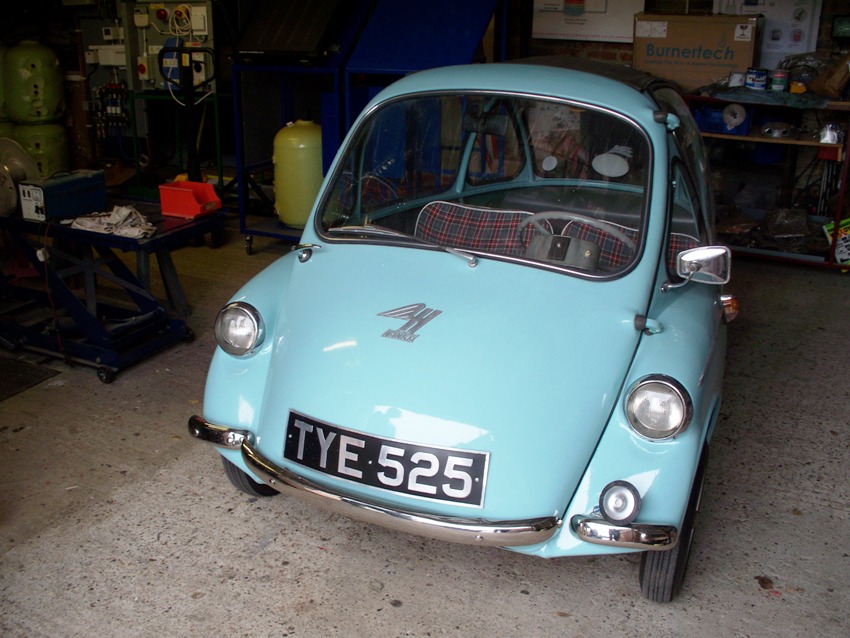 Their first Heinkel bubble car (Kermit) was made in Dundalk in Ireland. The cars made there were not of the best quality, and the family subsequently purchased a German-made one. This was fitted with a smaller 175 cc engine and it has been driven everywhere, including on the Continent, and it is totally reliable; it is by far the better of the two cars. 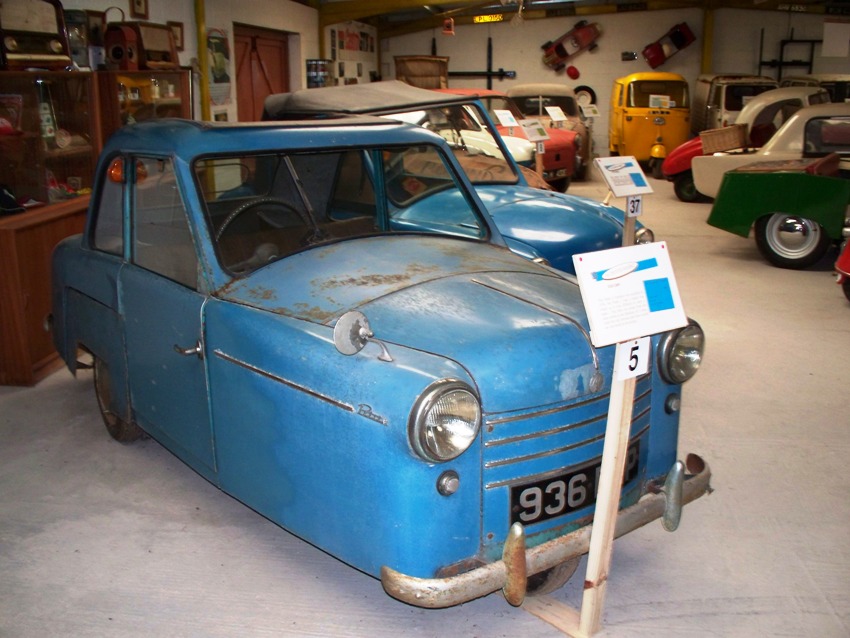 Walking around I spotted an AC Petite; these were a 350 cc three-wheeler. I remember these buzzing around in my youth. The Petite was very comfortable and had a top speed of 50 mph and could also eke out 50 miles to the gallon. The firm was well known for its sports cars. The factory was located in Thames Ditton in Surrey. The firm also produced invalid carriages for many years and an example of this on display is a 1966 AC Acedes.

For motorcyclists there is the “Moby”; this was maybe years before its time. It was based around a complete Yamaha QT moped with a body built around one side so the rider could stay warm and dry. I was told that unfortunately this proved to be a little unstable and it never reached production. Only a couple were made. 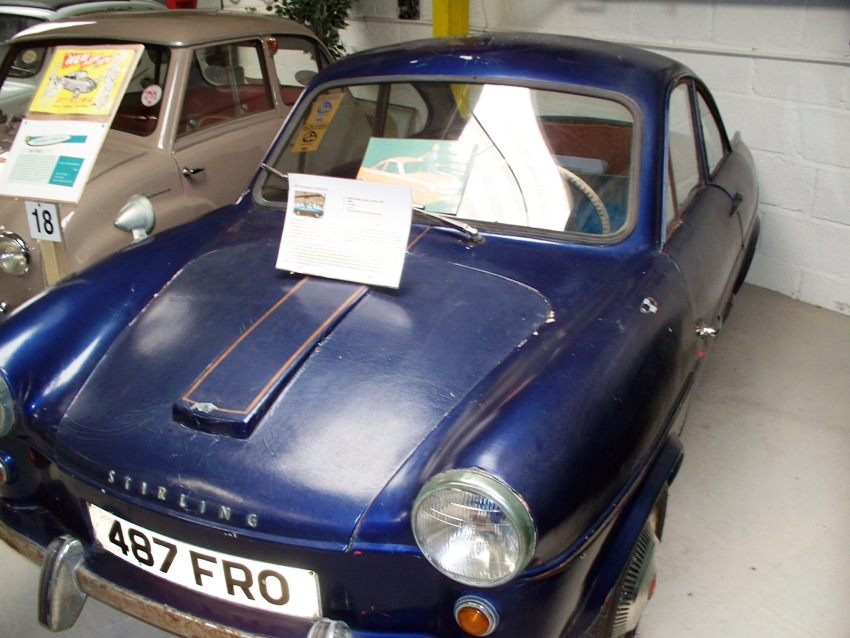 I have never seen some of the cars in this collection, one being the Opperman Stirling. The firm made two of these and only one remains. It looks a great motor powered by a 600 cc engine. This particular one was found in a lock-up, buried under a load of stuff. 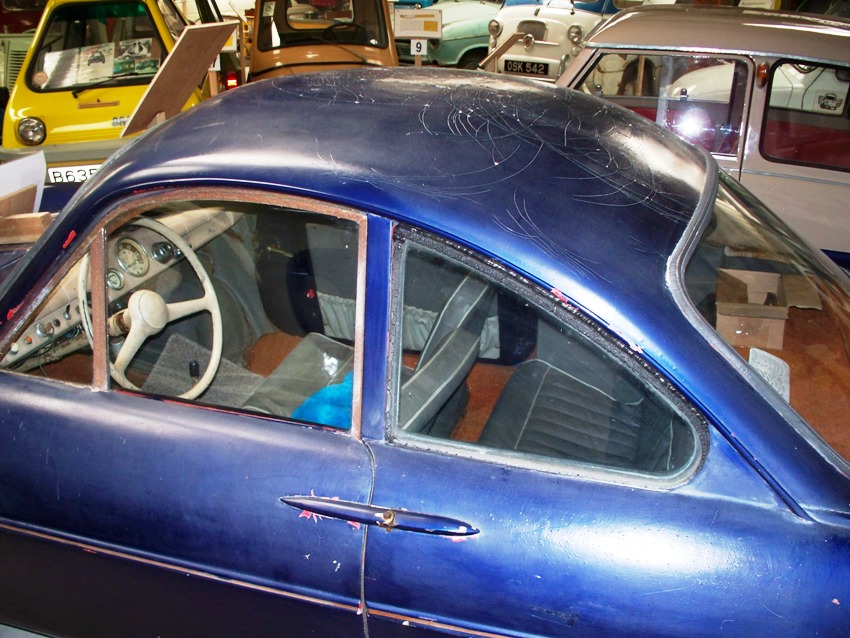 After everything was taken off the roof of the vehicle the roof just popped back into its orginal shape!! Opperman were better known as tractor builders, and were based in Boreham Wood, Herts 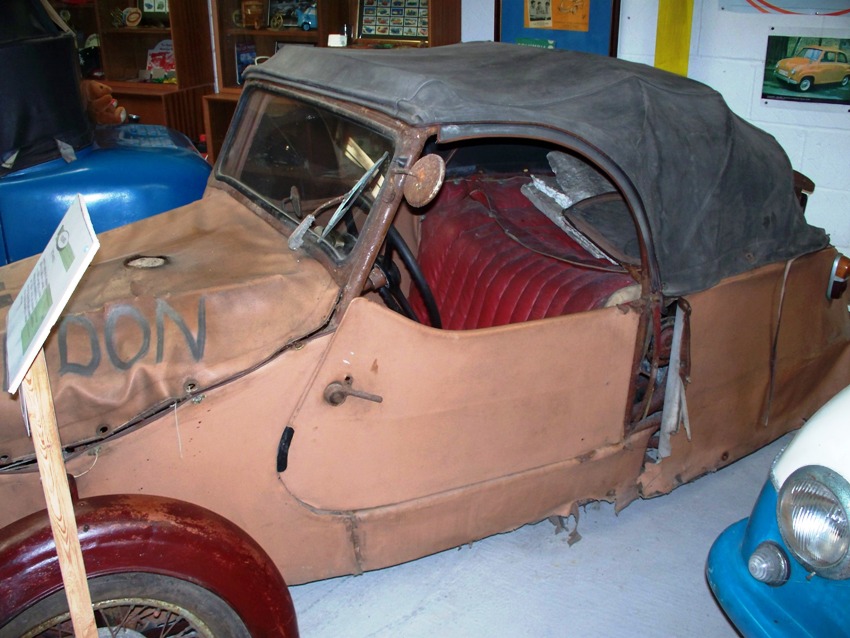 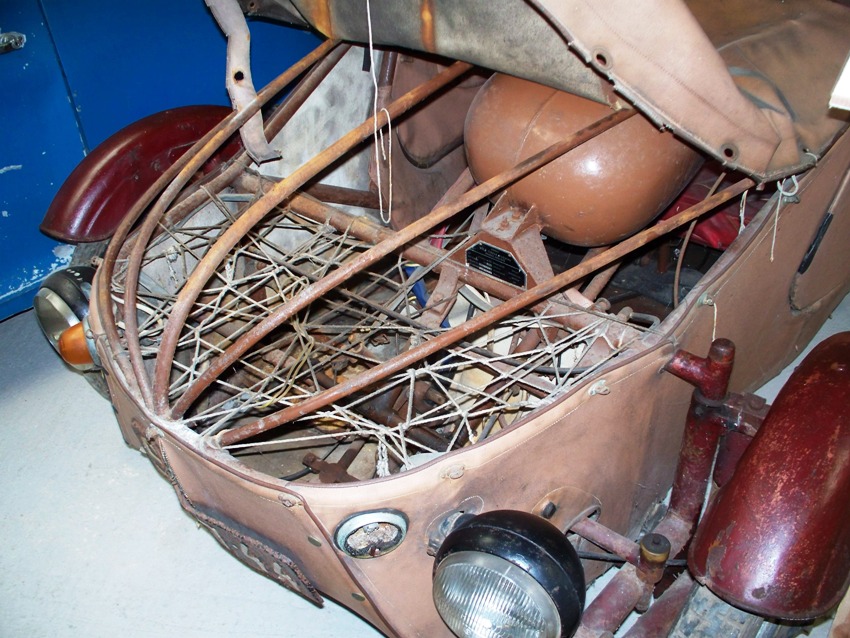 This is a great collection, and well worth a visit – a real motoring history lesson. This is combined with the fact that you can camp here – on a nice peaceful site. In the corner of the camping field there is a lake well stocked with fish, and only campers are allowed to fish there. Lesley told me that clubs are welcome and often they take over the complete campsite. 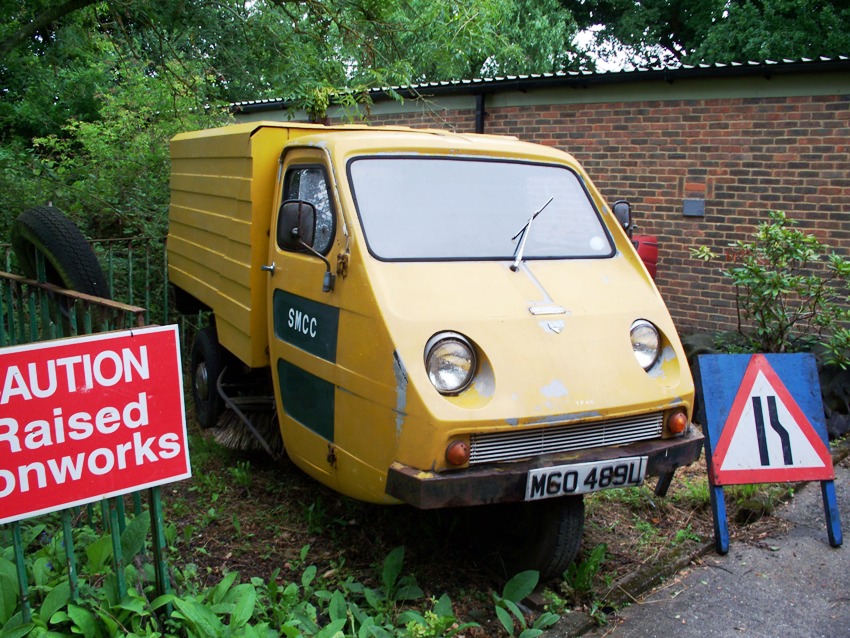