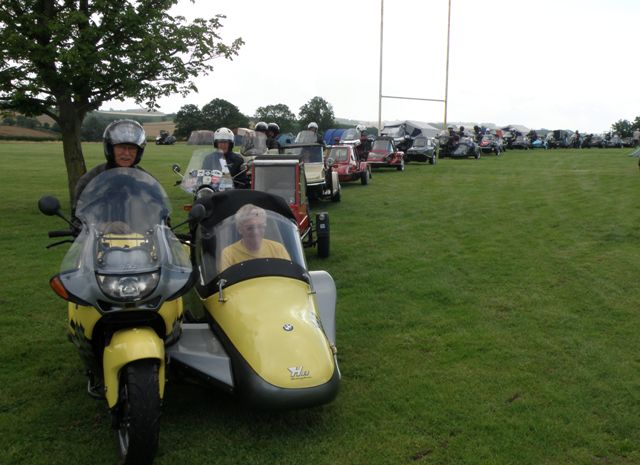 words by Roy and Chris, pictures Martyn, Rebo and Roy 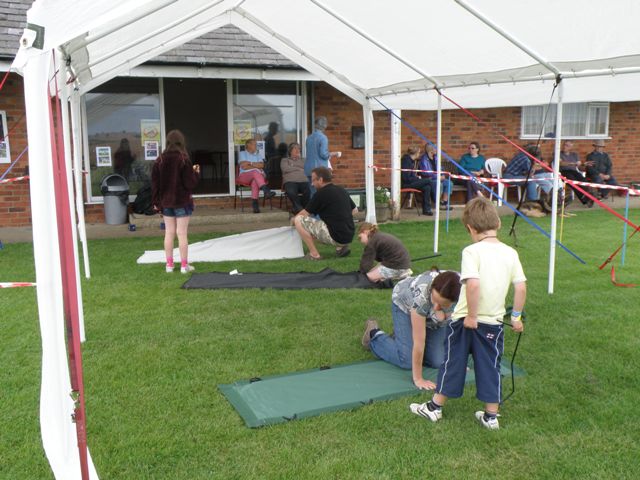 As the August weather this year is much more like April showers I decided to put on full waterproofs for the ride down to Hallaton, and … you guessed it … I had a dry ride there!! 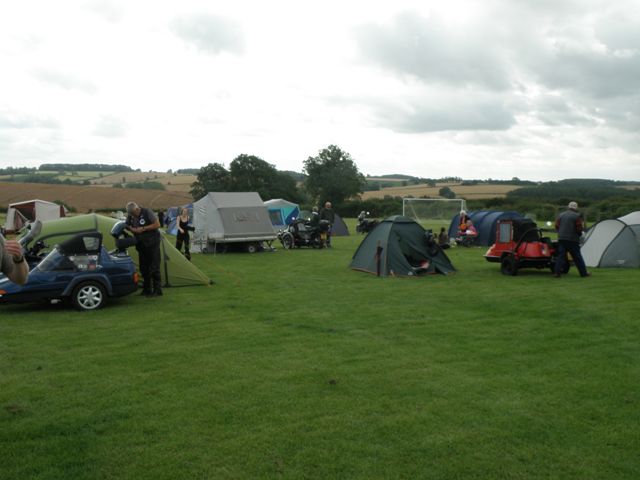 We arrived on Saturday morning, to be met by Lesley warning us that the ride out was taking place in one hour’s time. I went for a wander round the field, looking to see if I could get a lift in a sidecar for the run out. I managed to get a ride with Rebo and his yellow peril outfit; luckily I was wearing a yellow t-shirt so we were colour matched! 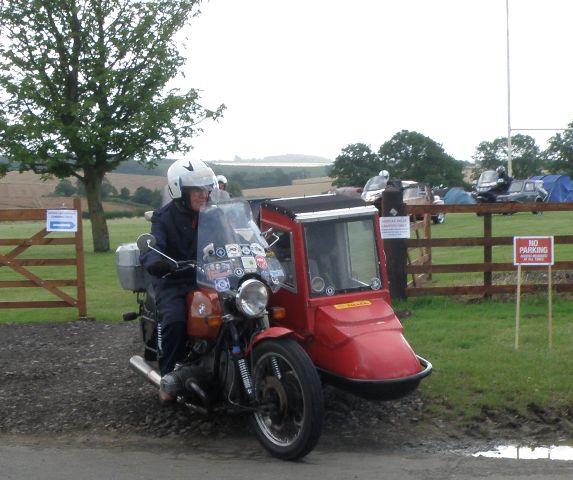 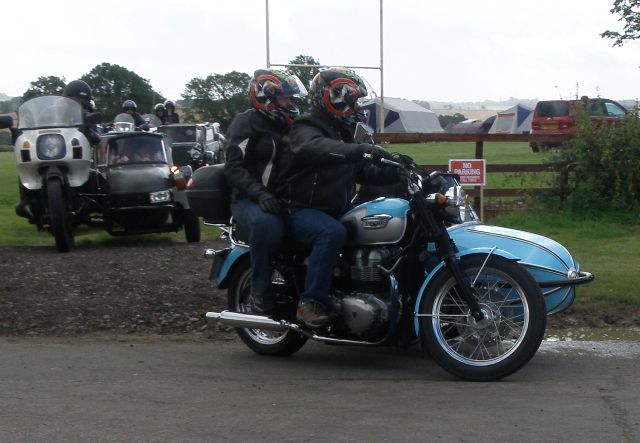 Rebo was leading the ride which was to a Transport Gala being held at East Carlton Country Park. We had passed signs for this on the way down. Soon after 11 o’clock the ride set off. Rebo, being leader, we went the scenic route around the lanes and villages, with lots of picturesque thatched cottages, and we went past Neville Holt, a massive house with its own church set in the grounds – very impressive. 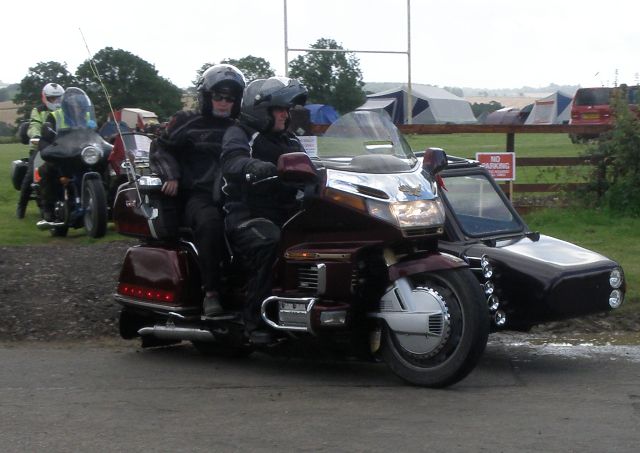 Not all the riders followed the leader; a few went straight there, but this worked in our favour. Trike Paul managed to get a discount for us – the regular price was £3.50 a unit, but he got this down to £1 a unit. Well done Paul!! The site was impressive. I was told that this was the second time that the Club had had a run out here. Twenty outfits went on the ride. 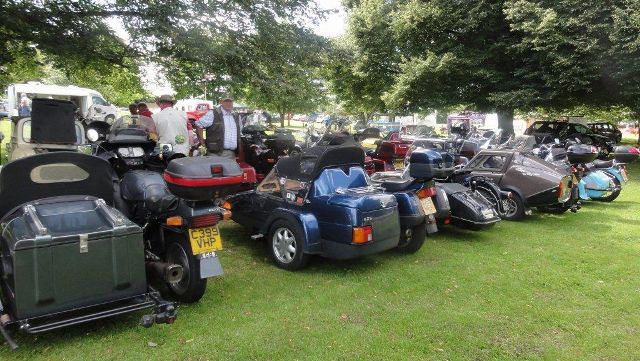 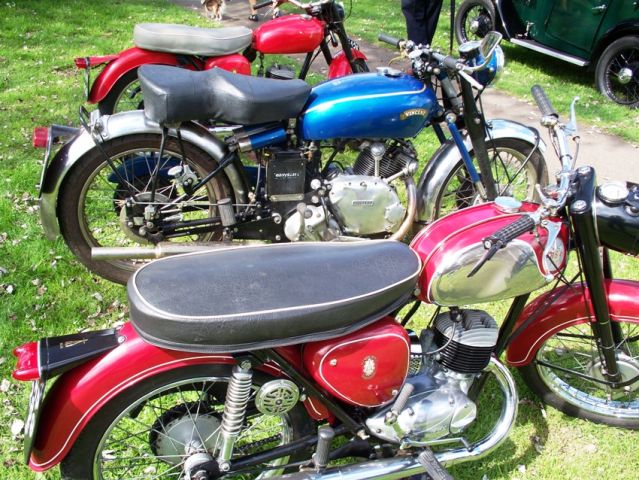 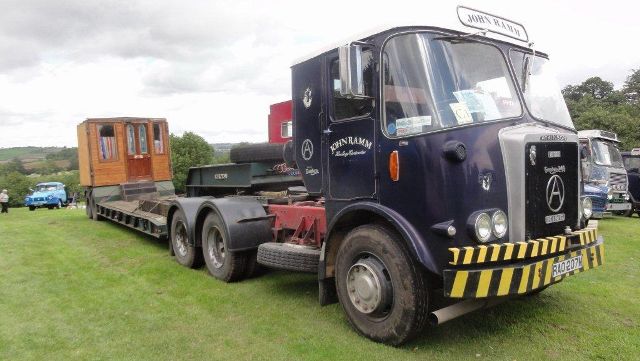 On the ride we had managed to dodge the showers, although the roads were quite wet at times. The weather at the show stayed good right until the end of our visit. The show itself was interesting, with a nice mixture of classic cars, commercial vehicles, motorcycles, trikes, tractors and model steam engines. The latter were big enough so that you could ride on them. There were lots of various stalls, including some owls on display. 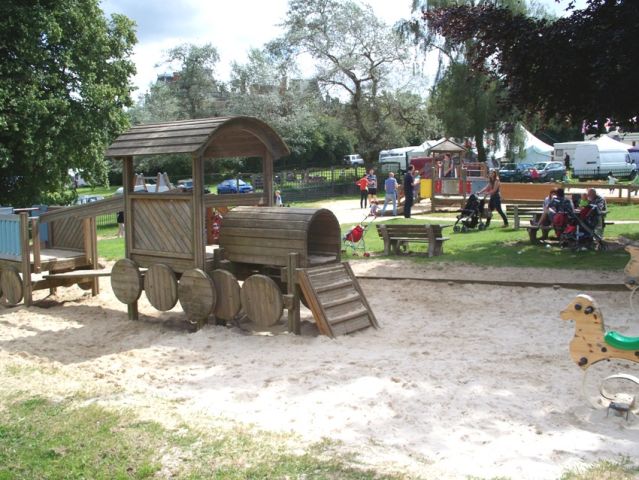 You were allowed to stroke these, which I did whilst hoping that the bird had been fed recently!! There was plenty for the children to do, with lots of swings and roundabouts, etc. There was also a nice café doing good food; the café also had an outside seating area. 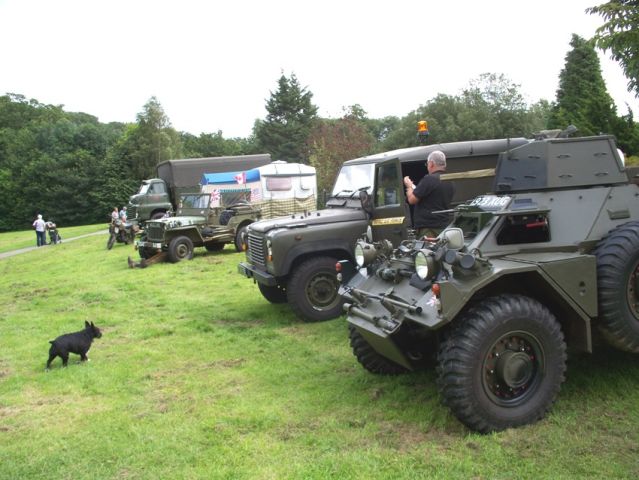 Another display was for Help the Heroes. They had a shooting gallery and several military vehicles on display. Close by were several classic motorcycles, including a Vincent Comet. Chatting to some of the owners, they felt the show was a bit smaller this year, with not as many trade stands as normal; still, this could be a sign of the times. One chap (who could have been the owner of the blue Vincent on display) knew of Dave Johnson (the Vincent nut). This chap was a bit surprised when I told him where Dave lived. Some of these riders had previously ridden outfits and were interested in the Fed, so I took the opportunity to pass out some flyers.

A couple with one of the classic cars told me that they had ridden outfits for many years, and we had a nice chat. They looked at our outfits and recognised a couple sidecars that they had owned. Their son had very recently sold his outfit, and they gave him a call to see if he could get to the show and see what we had ridden in. 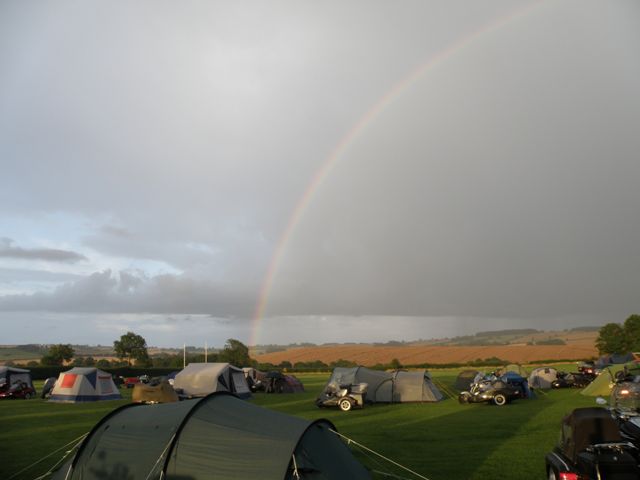 The return to Hallaton was timed for 3.00 pm. However, about 2.00 pm it got colder, the clouds gathered and it started to rain, and then it rained very heavily. Wet weather kit went on very quickly. I guess we all felt sorry for a group of Valkyrie riders who were returning from a trip. Their bikes shone and some of the riders were wearing sun glasses. 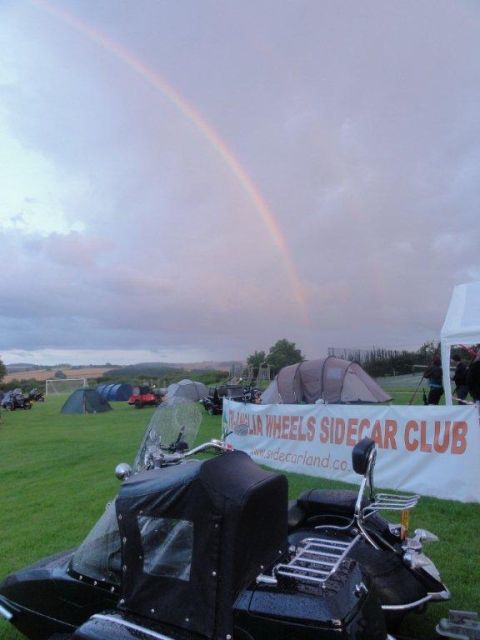 They looked good, but very, very, wet!! The pull-out time was brought forward and we rode back to base.   The field felt soft as we rode in.   The only advantage of this wet weather was that I could push my tent pegs in by hand.

There were a couple of quizzes to take part in. One of these was a “spot the ball”. I had a go. Later on the pictures showing where the ball was were put up, but I had not got much right!!   Now I know why I have not won much in the “spot the ball” competitions that I do with the football pools!! 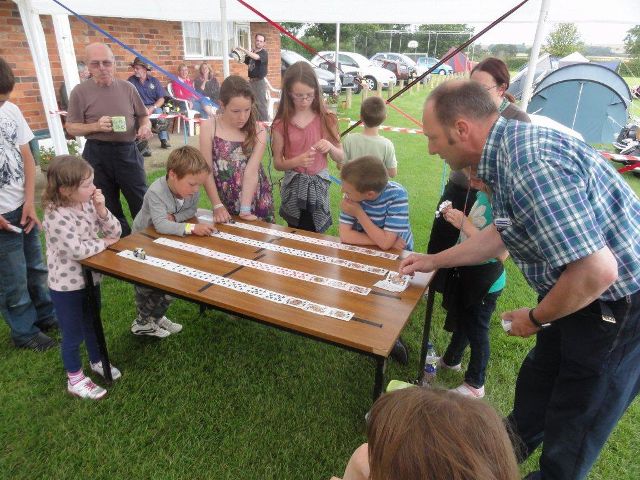 The children’s Grand Prix was as well supported as ever. The final was very exciting, with all the players being on the queen waiting for the turn of the last card. James got the winning line – well done!! 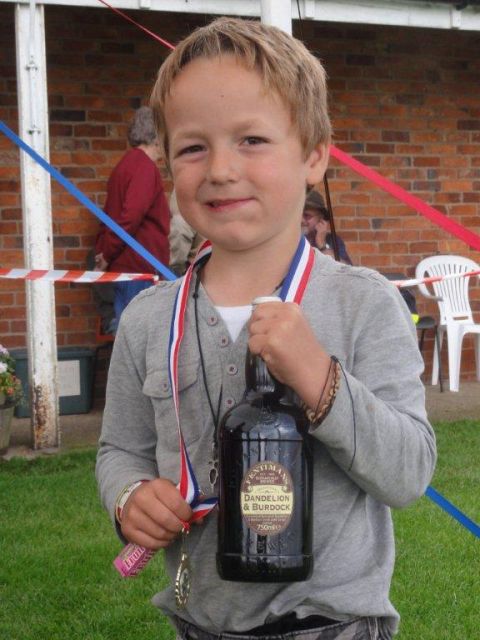 The raffle then followed, with lots of prizes to choose from. However, I had bought the wrong tickets, but luckily Chris had some good ones. 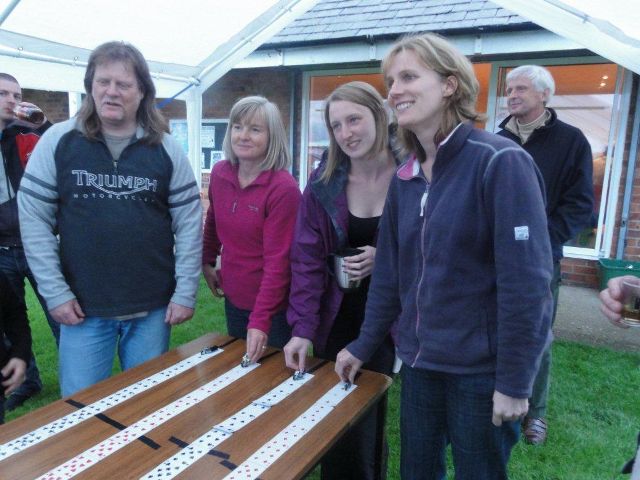 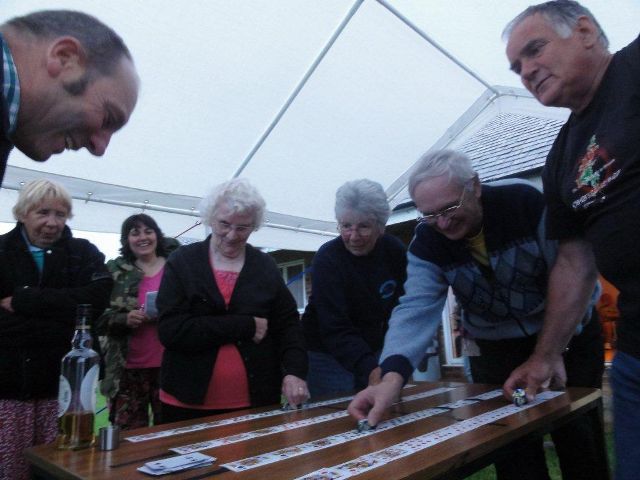 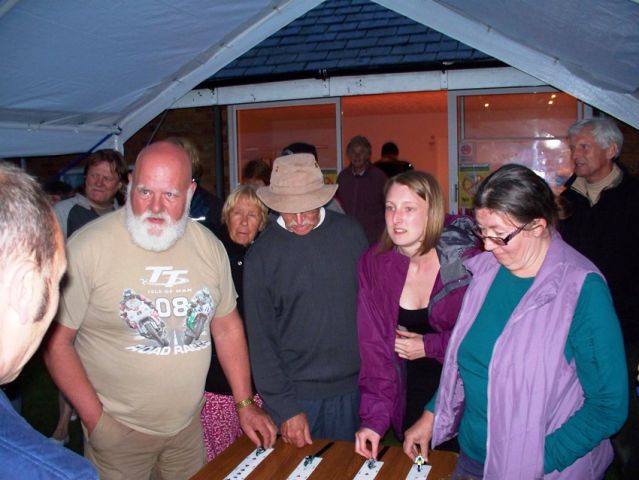 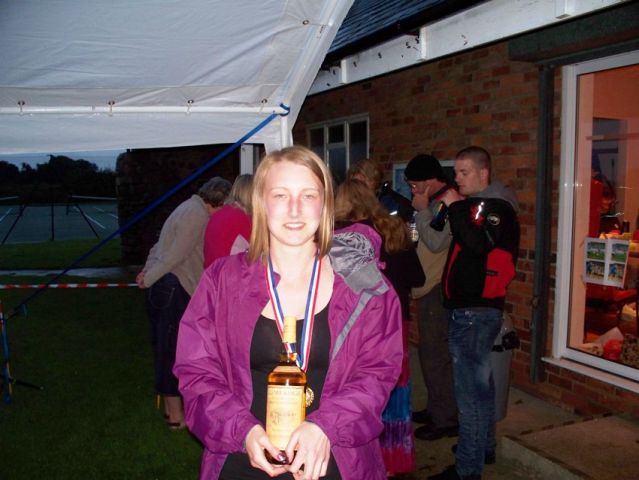 Sunday was a bright morning and the tent was taken down, but it would need drying out at home. I spotted Martin Ford on the site – it was nice to catch up with him again.

This was a well-supported rally with 40 units booked in.   Another well- organised rally by the club – well done!!

Many thanks to club members Roy and Chris for sending in the above article; Martyn and Lesley would like to say thank you to all who helped over the weekend. A few special mention in dispatches; Rebo for organising the Run-out and lending a hand very early Thursday setting up, Ann for help in the kitchen, cleaning, raffle etc, Pat and Lydia for the quiz, notice board and hall booking etc, and those who donated raffle prizes. Chaddy for being the run-out outrider and his words of wisdom on the time to take down the marquee, and the marquee packing team who never really succeeded to get it in the bag right, how many attempts Lads?, and a thank you to anyone we have missed. Lastly, a thank you to all the ladies who baked cakes to sell over the weekend, and “Two Cakes Ray” who arrived with one, apparently he started out with two cakes; cakes and our Ray, well it’s bit like carrying eggs in a top box, you just know they ani’t all going to make it.

Due to the change of access onto the field at the Hallaton site and inadequate toilet facilities, next year the Soiree will be moving to a new site, also our early camping weekend in March is moving and will be held at a new site near Kings Lynn, visit our events page for more information. Finally we would like to thank all who attended and hope to see you next year at one of our new venues.